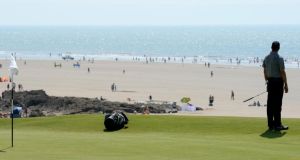 Bob Tway of the USA in action in the second round of the Senior Open Championship at Royal Porthcawl GC in Bridgend, Wales. Photograph: Ross Kinnaird/Getty Images

Ronan Rafferty and Philip Walton made the halfway cut by the skin of their teeth in the Seniors Open Championship at sun-blessed Royal Porthcawl in South Wales yesterday, as German superstar Bernhard Langer strengthened his grip on the title.

He goes into the third round seven strokes clear of England’s Chris Williams and treble-chasing Colin Montgomerie, who produced a stunning 66 for 138, carding eight birdies.

“I played very smart, very aggressive, then very smart and I was fortunate to some extent, but I have played very well the last two days,” Langer said afterwards.

“It wasn’t the kind of start I wanted today, but from that point on, I settled down and I played some really good golf.

Rafferty, in his first year as a senior and only a part-time competitor golfer these days, posted a second round two over par 73 for a 36-hole total of 148-six over par, just one stroke inside the cut.

The Newry-born former international who won the British Boys title at 15 and played Walker Cup golf at 17 had back-to- back birdies at seven and eight which helped him reach the turn in 35, while he came home in 38.

“I have not been playing much lately so my main aim was to make the cut, ” said Rafferty, who played at Porthcawl in the 1980 amateur championship and home internationals before turning professional and competing in the Coral Classic on the South Wales links.

He started with a triple bogey seven and never recovered although a birdie four at the last saved him from elimination.

“It was tough out there today but no excuses, I played badly,” said Walton.

Des Smyth was desperately disappointed as he slumped to a 79 and out of the tournament on 151 after starting with four straight bogeys, while Mark McNulty, the former Zimbabwe international who gained Irish citizenship in 2003, crashed on to the sidelines on 153, as did Denis O’Sullivan with 156.

1 A beautiful, happy accident - Moneyball is the best sports movie ever
2 Matt Williams: We all need a bit of Bud Maher’s resilience right now
3 Nicholas Quinn: ‘Swimming became how I dealt with grief’
4 Is it time for the New England Patriots to tear it down and start again?
5 Reality Bites – Tales from the new normal: Caitríona Cormican
Real news has value SUBSCRIBE