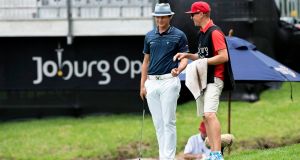 Tapio Pulkkanen of Finland talks to his caddie during the second round of the Joburg Open at Randpark Golf Club in Johannesburg. Photograph: Catherine Kotze/EPA

Tapio Pulkkanen carded a bogey-free 64 to take a one-shot lead into the weekend at the Joburg Open.

The Finn is playing his first full season on the European Tour after winning the 2017 Challenge Tour but looked very much at home in Johannesburg as he got to 14 under and established a narrow advantage over India’s Shubhankar Sharma.

As well as playing for the trophy this week, there are three places on offer at the 2018 British Open, with the top three players not already exempt earning a place at Carnoustie.

Pulkkanen opened with a 65 on the Bushwillow Course and started his round on the Firethorn Course with six birdies before adding two more on the 11th and 12th.

“It was a good start to my round with six birdies in a row. The putter has been really hot, I practised my aiming a little before the tournament and it’s been much better this week.

“Leading a European Tour event so early on in my season sounds more magnificent than it really is. It’s a similar feeling to the Challenge Tour actually, so I’m comfortable.”

Sharma fired an excellent 61 on the Bushwillow Course to get to 13 under, a shot ahead of Finland’s Mikko Korhonen and South African Erik van Rooyen.

Ireland’s Gavin Moynihan missed his second straight cut after earning his Tour card despite shooting a two-under 69 in his second round. That left him on two under and in a share of 100th position.