Paul Dunne slips back after third round in Doha 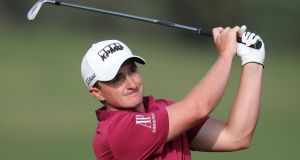 Ireland’s Paul Dunne is six shots off the lead after a third round two-under par 70 at the Commercial Bank Qatar Masters in Doha.

The Greystones native began the day just a shot off the lead, but goes into Sunday’s final round in a tie for 10th position.

An eagle on the par-four fifth hole was the highlight of Dunne’s round, which included three birdies and the same number of bogeys.

Korean Jeunghun Wang surged into a three-shot lead with seven birdies in his third round.

The 21-year-old was one of a European Tour record nine golfers vying for the lead on eight under at the midway stage.

But he moved clear of the field on 14 under on Saturday, with South African Jaco van Zyl and Spain’s Nacho Elvira his nearest pursuers — both in the group previously jostling for the lead at the end of the second round.

Englishman Nathan Kimsey, meanwhile, moved up for a share of fifth place — only four shots away.

The 23-year-old charged up the leaderboard, matching his opening round of 66 after falling off the pace on Friday when he shot 74. His six-under effort was bettered only by Wang’s bogey-free round, and it left Kimsey alongside fellow Englishman Andy Sullivan and three others.

After his flawless round, Wang confirmed his liking for the breezy conditions and admitted he is beginning to fancy his chances of closing out victory.

“My irons and putting are really good this week, so I think I have a good chance to win,” he said.

Ireland’s Graeme McDowell shot a third round 70 to leave him five under overall - and in a tie for 34th position.