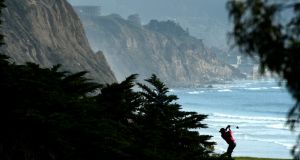 Hunter Stewart tees off on the seventh hole during the first round of the Farmers Insurance Open at Torrey Pines North in San Diego, California. Photograph: Donald Miralle/Getty Images

Ireland’s Paul Dunne made an excellent start to his USPGA Tour career at the Farmers Insurance Open in San Diego on Thursday, carding a three-under 69 to lie three shots off the lead in a share of 15th position after the first round.

The Greystones golfer was three under after nine holes, having started on the 10th hole of the South Course at Torrey Pines , and got to four under after a birdie on the third hole before giving away his only shot of the day on the fourth hole.

Dunne plays the North Course on Friday, considered to be the easier of the two, as he looks to take full advantage of a sponsor’s invite on the west coast of America and he is confident that he can push on in his second round.

Speaking of the back nine on the South Course, Dunne said: “To me that’s the toughest nine of the four we play in the first two rounds so I was really pleased to go begot-free and I just kind of held on on the front nine.”

Shane Lowry finished birdie-birdie on the North Course to dip under par as the Offaly golfer carded a one-under 71 in his season opener.

American journeyman Scott Brown stole the limelight from some of golf’s biggest names as he recovered from a shaky start to charge into a share of the lead in the first round.

While defending champion Jason Day struggled after the turn to card a level-par 72 and world number four Rickie Fowler carded a 73, Brown reeled off eight birdies in his last 11 holes on the South Course to fire a 66.

Brown caught fire over his closing stretch after making two bogeys in the first six holes to end the day level with fellow American Andrew Loupe, who set out on the North.

“I knew I was hitting it good,” Brown, 32, told Golf Channel about his mindset after his stumbling start. “I was hitting good shots, I just made a couple of stupid bogeys.

“I hit a ball in the hazard and made bogey on a par five but I really hit some close iron shots and fortunately made some putts. And it turned into me birdieing eight of my last 11 (holes,) so that was nice.”

Brown, whose only PGA Tour victory came at the 2013 Puerto Rico Open, planned to maintain a strategy of attack on the North Course for Friday’s second round.

“The rough is still high over there and thick and you’ve still got to drive it good to get yourself into position,” he said. “But you can make a few more birdies over there so I’ll just try to keep the aggressive mind-set.”

Americans Billy Horschel, Patton Kizzire, Tom Hoge, Rob Oppenheim and Harold Varner III all opened with 67s on the North Course while three-times champion Phil Mickelson rebounded from a double-bogey on his second hole to match Dunne and card a 69 on the South.

“I really didn’t feel the stress,” Mickelson, who tied for third at last week’s CareerBuilder Challenge in his first event of the season, said of his stumbling start on Thursday. “I knew that I had been playing so well.

“I tried to be patient . . . and the round just slowly progressed. I just kept hitting good shots. I hit a lot more good shots on the back and had a few tap-in birdies. It was a good start.”

Fowler, who won the European Tour’s Abu Dhabi Championship on Sunday, said of his 73: “Terrible. I think that sums it up pretty easily. It was just bad golf. I couldn’t get anything going.”

Australian world number two Day, who withdrew from the pro-am competition on Wednesday because of flu-like symptoms, looked fatigued throughout his opening round and declined to speak to reporters afterwards as he returned to his hotel room to rest.