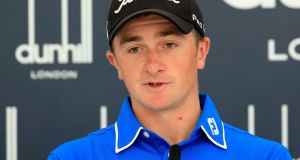 Paul Dunne: “I didn’t see it as a big deal to turn pro, I just saw it as the next thing to do.” Photograph: David Cannon/Getty Images

Escaping the remnants of Storm Barney isn’t the real reason for Paul Dunne jumping on a plane this Saturday. Rather, as one of the newest recruits to the PGA European Tour, the 22-year-old from Greystones, Co Wicklow is taking advantage of his status as a fully-fledged tour professional to hit the ground running in sunnier climes.

There might be a safari and a spot of surfing thrown in on his visits to South Africa and Australia over the next two weeks, but for the most part, it is a case of getting down to business for Dunne, a business finance graduate from the University of Alabama-Birmingham who has made a seamless transition from amateur to professional life in a standout year.

Dunne, who led into the final round of the British Open at St Andrews and holed the winning putt for Britain and Ireland in the Walker Cup, has more often than not found a way to get the job done. His most recent achievement – claiming that full tour card for the forthcoming season – was, though, his number one goal.

In the early part of the year, even with one eye set on making the Walker Cup team, it was Q-School that was his main aim.

“When I was in college, I’d write it on a piece of paper and sometimes pin it on the wall over the bathroom so that when I work up in the morning I would see it,” he says.

And looking at that bigger picture was why Dunne spent much of the early part of the year working on his game, particularly his driving, so that he could achieve that aim.

“I looked at what I needed to do to improve and help me when it was time to leave college and go to turn professional. I isolated some areas that I thought I needed to get better at,” Dunne says.

“The first half of the spring season in America I struggled a bit but I was looking at other things and looking more long term in my approach to my practice, trying to get better for the future.

“It was about four or five months in total, four or five months struggling playing golf every day, it is longer than it sounds . . . it is tough because you don’t know if it is going to come through in the end. There will be plenty of times like that in the future where I need to change something and you have to go through a rough spell to see the light at the end of the tunnel.

“When you are in the rough spell, it is hard to see the benefits you are going to get from it at the end, but it is something that I am definitely happy I did and I think it has made all the different to my golf this summer.”

It was the week before the British Open, playing for Ireland in the European Team Championships, when he felt his swing and driving clicked into place. He has hardly looked back since.

Now, having coming through all three stages of Q-School, he has that previous tour card that enables a player to map out a schedule and to chase new dreams.

His move into the professional game has been rather seamless. “It has been pretty straightforward,” he says. “It sounds elementary to say, but golf is golf. It doesn’t really matter if you are an amateur or professional, it is the same game you play.

“You play similar courses; it is just a slightly different environment. I play with the attitude to try to shoot the best score than I can and I take the same attitude I did as an amateur into events I play as a professional. I still do the same things, have the same practice habits, do the same things at tournaments.

“I haven’t changed anything, so it didn’t really seem much of a transition. I didn’t see it as a big deal to turn pro, I just saw it as the next thing to do.”

Dunne is also bringing Thomas Sutton, a college friend and former team-mate of his, with him to caddie for next week’s Alfred Dunhill Links championship at Leopard Creek and the following week’s Australian PGA championship in Queensland.