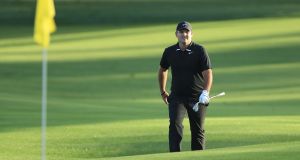 Patrick Reed during a practice round at TPC Sawgrass. Photograph: Sam Greenwood/Getty Images

Patrick Reed blames the media for the ongoing attention to the rules violation that continues to follow him three months after the incident, but such deflection does not sit well with former European Ryder Cup captain Paul McGinley.

Reed is still being heckled by spectators, but the man dubbed by retired player turned commentator David Feherty as “Captain Oblivious” said on Wednesday that the players have “moved on”.

This might be news to recent world number one Brooks Koepka, who in a recent interview severely criticised his 2018 American Ryder Cup team mate for a rules breach at the World Challenge in the Bahamas in December.

Reed was penalised two strokes after television footage revealed he had improved his lie in a sandy waste area, and while the American accepted the penalty without complaint, he said he had not deliberately improved his lie.

This did not sit well with Koepka, who accused Reed of “building sand castles in the sand”.

Reed was asked on Wednesday whether he had spoken to Koepka since. “Last week he played in the same event and I don’t think I saw him once,” Reed told reporters on the eve of the Players Championship at TPC Sawgrass. “At the end of the day, the noise goes away once you all decide it goes away.”

Some fans have not been forgiving of Reed, who was often heckled at the Presidents Cup in Australia in December, where his brother-in-law caddie was banished from the event after getting into a fight with a fan.

Back on American soil, a fan screamed “cheater” after Reed stroked a putt in a playoff at the Tournament of Champions in Hawaii in January.

And just last Saturday, a spectator was ejected from the premises at the Arnold Palmer Invitational after calling out “I’ve got a rulebook in my back pocket Patrick,” according to the New York Post.

“He has lost me. Where he really lost me on the back of Bahamas was not standing up for the game of golf,” Irishman McGinley said on Golf Channel.

“And saying this looked terrible on TV, I need to be more careful, I’m really sorry it came this close.

“Instead he didn’t do that. He doubled down and said everybody else is wrong I’m right. That was very disappointing from Reed because there are so many things I admire about him.”