Padraig Harrington and Gavin Moynihan fight back in Italy 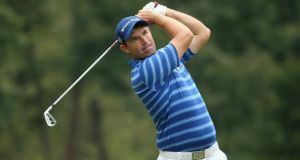 Padraig Harrington plays an approach shot during the first round of the 72nd Open d’Italia at Golf Club Milano in Monza, Italy. Photo: Andrew Redington/Getty Images

After last weekend’s Walker Cup heroics Ireland’s Gavin Moynihan made his first professional appearance on the European Tour when he teed it up shortly after 11.30 this morning in at the Italian Open in Milan.

Playing on a sponsor’s invite The Island golfer got off to the perfect start with a birdie at the first but faltered as the front nine went on, bogeying the third, seventh and eighth to go out in 38.

Another bogey at the 11th looked to be setting the tone for somewhat of a derailment but the Irish Amateur champion battled hard to birdie the 16th and 18th, finishing with a one over par total of 73.

With the first round scoring particularly low and lift-clean-and-place in play for the rest of the week the cut will almost certainly be under par but Moynihan has at least given himself a chance of making it to the weekend on his pro debut.

Also fighting back after a poor run in the middle of his round was Padraig Harrington.

The three-time major winner went out in a one under par total of 35 before dropping shots at the 11th and 12th. However a birdie at the 14th, followed by a an eagle three at the 16th after a searing six-iron to five feet saw him sign for a two under par total of 70.

Leading the Irish contingent is winning Ryder Cup captain Paul McGinley and Castleknock’s Peter Lawrie. Both sit at four under par after opening rounds of 68.

For Darren Clarke it was a first round of 70 while Damien McGrane had to settle for a level par 72.

Kevin Phelan and Simon Thornton both sit on the same mark as Moynihan after opening 73s.

Setting the pace however is former Ryder Cup player Nicolas Colsaerts who fired eight birdies in a row on his way to a “pretty easy” 63 to claim the first-round lead in Milan.

Starting on the back nine Colsaerts began with four pars before five straight birdies from the 14th took him out in 31.

The Belgian then got up and down from a greenside bunker on the par-five first and also birdied the second and third to make it eight in a row, although the preferred lies in operation mean the 32-year-old did not officially equal the European Tour record.

However, a ninth birdie of the day on the eighth gave Colsaerts a two-shot lead over India’s Shiv Kapur, home favourite and former champion Francesco Molinari and Sweden’s Kristoffer Broberg.

Colsaerts has not won since claiming the World Match Play Championship in 2012, which persuaded European captain Jose Maria Olazabal to give him a wild card for the contest in Medinah.

The former world number 32, now ranked 218th, has also been overtaken as Belgian number one by compatriot Thomas Pieters, who won his second event in succession in the KLM Open last week.

“It all felt pretty easy to be fair,” Colsaerts told Sky Sports 4. “We all know what it’s like when you get on fire and keep going. I did not know how many (in a row) it was; at one stage I started counting and stopped at six.

“It did feel like you could birdie every hole because I was playing nicely. I only holed a very long one on the second, which was my 11th, but all the others were very makeable.

1 Betting shops face uncertain future as they prepare for Monday reopening
2 Ian O’Riordan: An education in race and running during college days in America
3 Timo Werner giving up on Liverpool dream on path to being truly wanted
4 Tianna Bartoletta: ‘After you’ve gotten your medal, you become black in America again’
5 Mature Ringrose keeping the ups and downs of rugby life in perspective
Real news has value SUBSCRIBE