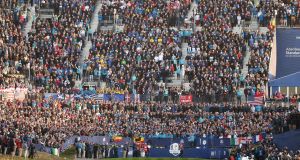 Europe captain Padraig Harrington says he and USA counterpart Steve Stricker are not in favour of the Ryder Cup being played behind closed doors.

The biennial competition is, for the moment at least, scheduled to go ahead in September at Whistling Straits in Wisconsin.

Talks have reportedly taken place over holding the competition behind closed doors, plans which are said to have faced opposition from players who believe the event relies on the atmosphere generated by spectators.

Harrington says there is a consensus that there is no need at this stage to make any decision on whether it is played with or without fans.

“In another two months we will know a lot more,” Harrington told BBC’s Today programme.

“But nobody feels they need to make that decision at the moment.

“For me and Steve (Stricker), neither of us would like a situation where the fans don’t turn up.”

The PGA Tour is set to resume in June with the first four events to be staged behind closed doors.