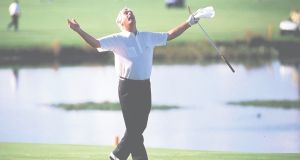 When Lemmy died last week, probably the best yarn about the old Motorhead rock god came from a music journalist who asked him once if he got bored playing The Ace Of Spades every night. “Why would I?” answered the great man. “It’s f**king brilliant!”

Christy O’Connor jnr was more than just a two-iron swished to four feet at the Belfry in 1989 but it’s hard to think of a golfer more acutely defined by a single shot.

He won four European Tour tournaments, was back-to-back winner of the British Seniors Open and went on to design some of the cleverest golf course lay-outs in the country.

But close your eyes and picture him and the figure that comes to mind is always the same – head raised to the sky, arms outstretched, white cloth cap, white glove and putter in one hand, the other one opened to the heavens in clear and obvious thanks for what had just occurred.

Christy might not have had quite Lemmy’s zeal for reliving and rehashing his finest hour, although the amount of times that two-iron (or “that two-iron”) was auctioned for charity over the years tells you just what sort of staying power he knew it had.

But everything in life has its context and you need to go a bit deeper than the simple excellence of the shot to realise why it has resonated so down the years.

Christy and Eamonn Darcy and Des Smyth and John O’Leary were our representatives on tour and on the whole, they seemed to fit who we were reasonably well. Gutsy, doughty players with swings wrought of their own imagination and each of them given to occasional streaks of genius that carried them to success.

They didn’t dominate tournaments or blow fields away – of Christy’s four Tour wins, two were in playoffs, one was by a single stroke and the other was a dead heat in the 1975 Martini tournament which, quaintly, didn’t have a playoff because the sponsors thought it all a bit uncouth and ungentlemanly.

Golf wasn’t a big-time sport back then and even in its own shrunken universe, Christy and the lads were bit-part players.

Which was what made it so thrilling when one of them bubbled up to make a run at a big tournament.

O’Connor broke the course record at Sandwich on the opening day of the 1985 British Open. His 64 bested by one the previous record held by one of the gods of the game, Henry Cotton, who met O’Connor when came off the 18th green with a handshake and a quip: “Not a bad score for 17 holes, young man.”

Sports Illustrated later recounted the story of how a faux-pas by a BBC reporter ever-so slightly took the gloss off O’Connor’s day. Clive Clark informed Christy that his course record had earned him a bonus of £25,000. Considering that first prize in 1985 was £65,000, this was no small chunk of change.

O’Connor was delighted – he hadn’t heard such booty was on offer. And with good reason - it wasn’t. Clark had been mistaken and had told him in error. “To say I’m disappointed is a hell of an understatement,” SI quoted O’Connor as saying when he found out.

He went on to finish third that week, the highest placing in a Major in his career. And frankly, that was the most we expected of Irish golfers in those days.

The occasional run at a Major was a fantastical thing, the odd win against the head in the Ryder Cup was novelty beyond reason. Underdog stuff for an underdog nation, our stock in trade made flesh.

And so the win over Freddie Couples in 1989 – and that two-iron in particular – has such stickability precisely because we were able to wrap a narrative so snugly around it.

So many strands came together in that instant. O’Connor had a bad history with the Ryder Cup – beaten and pointless in 1975, overlooked for selection in 1985, the subject of outright derision from the English press when picked this time around.

He hadn’t even played overly well that week, losing his only match before the singles.

Couples, it’s often forgotten, was no great shakes himself that week. Or even at that point in his career. He’d won just one tournament in the previous five years and had had a similarly blank return for the week to O’Connor.

So while he was out-driving Christy by 50 yards on every hole, it wasn’t a complete shocker that O’Connor was chugging along, hare-and-tortoising his way to taking the match down the 18th.

A bit snappy, a bit whippy, like he wants to be halfway into his downswing even as the upswing is uncorking itself. His heels hop and drop, first the left, then the right. His left knee protrudes as he takes the club back – freeze the frame and there’s a prancing horse look about him.

But as soon as the ball leaves the club, it’s so true and so crisp that nothing that went before it matters. Not the journeyman’s life, not the Ryder Cup failures, not the BBC’s phantom 25 grand, not the hitch in his heels. Just a ball arrowing through the sky, drawn as a file to a magnet four-and-a-half-inches in diameter on the top shelf of a two-tiered green.

Christy O’Connor jnr’s life was more than that one shot. But man, that was living. F**king brilliant.

1 Philip Browne admits funding model for Irish rugby is not sustainable
2 BBC to show four live Premier League games as restart set for June 17th
3 Dr Bob Rotella: ‘If you focus only on the target you’ll play darn good golf’
4 Coming fourth in the Olympics didn’t change this fearless quartet, time did
5 Dave Hannigan: Trump gets the clubs back out as death toll keeps rising
Real news has value SUBSCRIBE