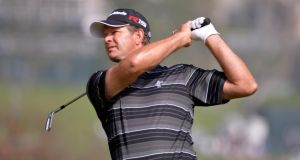 Retief Goosen of South Africa tees off on the 14th hole during round one of the Northern Trust Open at Riviera Country Club on February 19th, 2015 in Pacific Palisades, California. Photograoh: JD Cuban/Getty Images

Who says golf is a young man’s game? Not always, it would seem as Retief Goosen, who celebrated his 46th birthday two weeks ago, and Vijay Singh, an old man who celebrates his 52nd birthday this Sunday, rolled back the clock in the first round of the Northern Trust Open at Riviera Country Club in Los Angeles to share the clubhouse lead with rounds of 66, five-under-par.

For South African Goosen – once known as The Iceman on tour for his cool nerves but more recently out in the cold with an indifferent game – showed glimpse of his old self in an impressive round that conjured up memories of his two Major title wins in the US Open, in 2001 and 2004.

More than a decade on from that second Major triumph, Goosen carded seven birdies and two bogeys to rekindle his tournament flair.

He added: “I changed the loft on my putter a little bit (recently). I took a little bit of loft off it and it seems to sit a little better. (Two weeks ago) At Torrey (Pines), I felt like I was starting to make a few good strokes. Although I wasn’t making much, (it) just felt like the putter was sitting nice for me.”

Singh, who prefers to play the main tour and only makes occasional appearances on the Champions Tour, also showed his well-being with a 66. The Fijian’s last win on the PGA Tour came in the 2008 Deutsche Bank championship.

Goosen and Singh were joined on the 66 mark by in-form Nick Watney, James Hahn and Daniel Summerhays from the first wave of players.

Goosen and Singh escaped some of the problems which afflicted other players in an opening round, where Luke Donald, struggling to regain form, opened with a 77 and the unfortunate Scott Piercey took four shots from two greenside bunkers on his opening hole in eventually running up a first round 80.

Others never made it to the first tee: Australian Stuart Appleby withdrew shortly before his scheduled tee time with sciatic nerve problems and was replaced in the field by Germany’s Alex Cejka who made the most of his late call-up by posting an opening 68.

Jimmy Walker, the world number 13, went in as one of the pre-tournament favourites on the back of tied-fourth finishes in 2011 and 2012.

“Riviera is my favourite tournament of the year, the golf course is just so good. It’s the way the holes look, the way the terrain looks. It just fits my eye.”

His expectations, though, weren’t matched by his score as an opening round 73, two over, has left him with some chasing to do on the pacesetters.

Expect a shake-up in the Ireland frontrow; Sonia O’Sullivan on the difference between running fast and racing 07:23
Joey Carbery set for Munster return against Cardiff on Friday 07:00
With 19 wins in a row, Man City’s aura has been restored 07:01
Japanese fans told not to cheer during Olympic torch relay 06:51
‘I just feel very sad at the moment’ – Gemma O'Connor reflects on 19 years with Cork 06:31
Here is your handy guide to sport on television this week