Scott Pádraig’s burger bar to end on Sunday . . . Eisenhower Tree to return, but where? 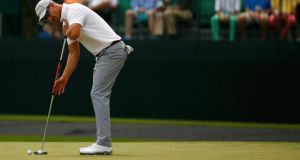 Adam Scott using his broom-handle putter during a practice round at Augusta National ahead of the start of the Masters. Photograph: Mark Blinch/Reuters

One milestone will be reached in this year’s Masters with no going back . . . it will be last one in which players will be allowed to anchor broom-handle putters.

From January 1st 2016, anchoring – where the putter shaft touches a part of the body and prohibits a free swinging motion – will be banned by the world’s governing bodies, the USGA and the R&A.

Adam Scott, Fred Couples, Bernhard Langer and Kevin Stadler are the four players in this year’s field who have persisted in using the method even though it is on its last legs.

Scott, the Masters champion in 2013, tried out the conventional putter at three of the four Florida Swing tournaments in the run-up to the Masters but reverted back to the long putter after some bad experiences on the greens at Bay Hill, where he had 128 putts over the four rounds and missed 11 putts inside 10 feet.

“I’ve no worries (about switching back to the long putter), I’ve been doing it for the last four years. It’s no problem at all,” said the Aussie, who intends to continue the broom-handle for the rest of the season before being forced back to the conventional putter next year.

Would you like a green jacket with your burger?

Pádraig Harrington is inclined to stay away from red meat during tournaments, because of the affect it has on his metabolism and on his sleep patterns.

But the three-time Major champion noticed that a Five Guys burger restaurant has arrived on Washington Road – just across from Augusta National – since he last played in the tournament in 2013.

“I think there’s a good chance I will be there on Sunday night, whether it is to commiserate or to celebrate,” said Harrington. The Dubliner dug his teeth into one of the burgers to celebrate his win in Honda Classic, a victory that earned him his ticket back to Masters.

A new Eishenhower Tree – to replace the famed specimen which once dominated the 17th fairway and which was lost to an ice storm in February 2014 – is to be replanted at Augusta National at a time and a location yet to be determined.

A glass-enclosed cross-section of the iconic loblolly pine was presented to the Eisenhower Presidential Library in Kansas with a similar display to be permanently housed at Augusta National, where Ike was a member and once sought to have the tree removed because it interfered with his left-to-right fade off the tee.

The display was “many months in the making to mitigate shrinking, cracking and twisting,” according to Augusta National chairman Billy Payne.

The original tree is being memorialised at the Eisenhower Library and at Augusta National in the special displays but a new version is being developed for future planting on the course. Two grafts and a seedling from the original Eisenhower Tree were preserved and are being cultivated.