More than 50,000 golfers have failed to renew memberships in Ireland and UK since 2014 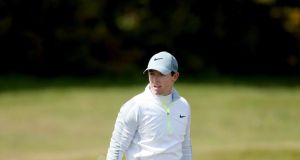 Golf’s posterboy Rory McIlroy may be Irish but membership numbers across the country are dwindling. Photograph: Inpho

‘Golf, like the measles, should be caught young, for, if postponed to riper years the results may be serious.”

Irish Open week. While there’s a healthy prize fund and fine field hosted by Rory McIlroy at one of the island’s great courses, many Irish clubs are facing serious challenges.

These are auspicious times for Ireland at the game’s top level both on and off the course. We claim the world number one. Irish golfers have claimed nine of the last 31 majors. The leading lady amateur in the game, Leona Maguire, is Irish. The 2016 European Ryder Cup captain too, as was his predecessor; and the incoming captain of the The Royal & Ancient Golf Club of St Andrews, Gavin Caldwell.

The R&A’s development committee will be happy that golf is continuing its global expansion – as of year-end 2014, there were 34,011 golf facilities in 206 countries (not including driving ranges or pitch and putt courses) – but the news is not all good. A 2015 report by KPMG’s golf advisory practice puts the drop since 2014 in the number of golfers registered with a European club or association at 77,000, with over 51,000 of those in Britain and Ireland.

While the percentage of full membership has declined at a greater rate than overall membership numbers, it’s part of an overall trend that in Ireland started in 2005. John Roche is director of golf and business development of the Confederation of Golf in Ireland (CGI), a body set up by the GUI, the Irish Ladies Golf Union (ILGU) and the PGA to advance the sport here. With the notion of an entry fee to a club almost extinct, Roche says “all of a sudden golf clubs are having to do something they’ve never had to do before, which is look at products and listen to the customer”.

Roche says that clubs must emphasise member retention in a way that, not so long ago, many never had to. After all, if somebody departed, there was a waiting list along with a nice fat entry fee. Exit interviews. Member satisfaction surveys. Communication to and from club members that amounts to something more than an invoice arriving at the end of the year.

If a 2014 Millward Brown survey can put the 2005-2013 decline in Irish adults paying for private health insurance at 23 per cent, that might put paying for golf membership in some perspective.

Roche, like Finn, doesn’t believe pace of play to be a major factor in decreased membership. But he pointed toward the game being made more accessible in other ways. “You can now get your handicap reduced on the basis of a nine-hole competition, which is a positive thing,” he said.

Golf is an unusual sport in terms of the number of years a player might remain active. Tom Watson almost won the 2009 British Open at a sprightly 59, after all. Over 8,000 of the 56,248 worldwide respondents in a recent R&A pace-of-play survey reported themselves to have been playing golf for over 40 years, with almost 3,000 ticking past the 50-year mark. That’s decades of club subs, green fees and equipment, not to mention food and drink in the clubhouse.

Finding the next Leona Maguire or Rory McIlroy is one thing. Finding a way to capture the time, wallets and hearts of those who keep Irish clubhouses open for years to come will be quite another. They need to attract former members, as well as members yet to be. Not a bad time to be a golfing customer, perhaps.