Lowry and McDowell go backwards as Brooks bounces back to lead 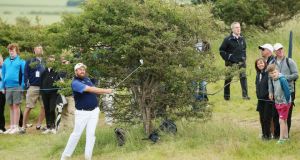 Shane Lowry hits his second shot on the first hole during the third round of the Scottish Open at Gullane Golf Club in East Lothian. Photograph: Andrew Redington/Getty Images

Moving day proved to be in a southerly direction for both Shane Lowry and Graeme McDowell at the Scottish Open and the Irish duo both carded two-over 72s at Gullane.

It left them both on six under and six shots adrift of England’s Daniel Brooks who got over a double-bogey six on the first hole to card a one-under 69 to move to 12 under.

A best of the day 64 saw Frenchman Raphael Jacquelin finish na shot off the lead in 11 under, while Rickie Fowler moved right into contention as he moved to 10 under following a 66.

Three straight bogeys from the fifth hole punctured Lowry’s title ambitions and he slipped to four over for the day after a further bogey at the 11th.

The Offalyman battled back to end the day on a high note with birdies at the 16th and 18th and he will look to go low on Sunday to try and get back into the top 10.

McDowell had just the single birdie in his third round, with three bogeys scuppering his chances of being at the business end come Sunday.

Brooks battled back from a nightmare start to reclaim the lead

The 28-year-old from Basildon held a three-shot halfway lead after impressive rounds of 64 and 65, but ran up a double-bogey six on the first after finding knee-high rough off the tee and needing two shots to hack his ball back on to the fairway.

With Jacquelin six under for his round after 13 holes, the world number 528 suddenly found himself two off the pace, but responded superbly with birdies on the fifth, eight and ninth.

And despite dropping a shot on the 10th as the wind strengthened, Brooks maintained his composure and a birdie on the 16th saw him card a 69.

“It’s good to get off to a bad start and hold it together,” said Brooks, who had missed 13 cuts in succession before finishing joint 20th in France last week. “It was playing tough and cold in the wind so it was nice to carry on the way I have been playing. I hit a lot of poor shots today but scrambled and putted well.”

Brooks won the Madeira Islands Open in 2014, an event reduced to 36 holes due to bad weather delays and overshadowed by the death of Alastair Forsyth’s caddie Iain McGregor on the course during the final round.

But the first prize this week of €750,000 would be more than triple his career earnings to date on the European Tour.

“It would be amazing to win, that’s what we play for,” added Brooks. “It’s the biggest day of my career but I am trying not to think about it. The main priority is to keep my card because I have been struggling all year.”

Jacquelin, who won a record nine-hole play-off to claim his last European Tour title in the 2013 Spanish Open, celebrated the wins of compatriots Thomas Levet and Gregory Havret in this event by spraying the victors with champagne on the 18th green.

“I’m ready for that now,” he joked. “You can see me on the picture of Gregory, he’s full of champagne. Thomas, as well. I was there every time. It’s always been good fun; I remember my first win was in 2005 and they did it.”

This season has not been fun so far for Jacquelin, who missed the cut in five straight events until finishing 23rd on home soil in Paris last week.

“It’s been hard,” the 40-year-old said. “The last three months is really difficult, especially for me. Normally I make quite a lot of cuts and play pretty solid off the tee and I hit a lot of greens.

“So it’s been tough but it’s my 20th season on Tour, so I’ve been lucky, never lost my card. So I can’t really complain, even if the last three months were difficult. It’s part of the game.”

Players Championship winner Fowler was joined by England’s Tommy Fleetwood and Dutchman Joost Luiten were two shots off the lead on 10 under, with Eddie Pepperell, Matt Kuchar and Russell Knox another shot back.

The last four British Open champions have played in the Scottish Open the week before lifting the Claret Jug, a streak Fowler would love to keep going after finishing in the top five in all four majors last year.

“The big key is preparation for next week,” said Fowler. “Not just playing the week before but also playing on a links golf course and having the opportunity to be in contention, it’s only going to help me for next week.

“Last year I finished eighth here and then went on to have a good week at The Open. So I am looking forward to tomorrow and having a chance at winning this thing down the stretch and putting myself in a position to go play well next week as well.”

Defending champion Justin Rose, who play alongside Lowry, also shot a level-par 72 to finish on six under.

Michael Hoey shot a level-par 70 to remain on five under, Pádraig Harrington a shot further back after also carding a 70.