Jason Bohn in stable condition after heart attack at Honda 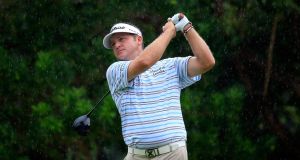 Jason Bohn is recovering in hospital after a mild heart attack at the Honda Classic. Photo: Rob Carr/Getty Images

Jason Bohn is in a stable condition in hospital after suffering a mild heart attack during the second round of The Honda Classic, the PGA has said.

The 42-year-old American, a two-time PGA Tour winner who is ranked 71 in the world, called for a doctor when he experienced chest pains after putting out in 18th hole at PGA National.

A report on www.pgatour.com said: “He was taken by ambulance to Palm Beach Gardens Medical Center, where tests revealed a mild heart attack.

“Bohn was in stable condition and will remain hospitalised overnight before undergoing more tests on Saturday.

“His wife was home in Atlanta but his in-laws joined him at the hospital, as did fellow player George McNeill, who said Bohn was in good spirits.”

Bohn withdrew from the tournament following his second-round 72, which would have seen him make the cut.