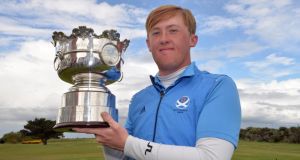 There are days you keep your head down and stay out of trouble. Yesterday was one of those times on this unforgiving links on Bull Island, as Scottish invader Jamie Savage, a 19-year-old with aspirations towards a professional career down the line, avoided any pitfalls in claiming the Irish Amateur Open championship at Royal Dublin.

The success, by two strokes over four players, marked the biggest win of Savage’s career.

But it was a case of what might have been for a couple of Irish contenders, with Cormac Sharvin – off an awkward lie – hitting his approach shot out-of-bounds into the Garden on the 18th in closing with a double bogey while long-time leader Gary McDermott’s putter turned cold at the most inopportune of times in the final round as he sought to claim a wire-to-wire victory.

Ultimately, Savage’s final round 71 for 288, level par, was sufficient to give him a two-stroke winning margin over Sharvin, McDermott, Dutchman Robbie van West and Manxman Tom Gandy.

“I had a number in my head,” admitted of Savage of his pre-round thinking, in chasing down a three-shot deficit on McDermott.

McDermott, a 32-year-old Sligoman now playing out of Carton House, was naturally “deflated,” as he put it, after a final round 76 that saw the title slip from his grasp. In particular, a double-bogey five on the seventh hole – where McDermott four-putted – proved costly, although that error was compounded by a failure to birdie the short Par 4 16th and a closing bogey on the 18th.

The key
“Without a doubt it was the key,” said McDermott of his play on the seventh green.

“It was a lapse in concentration and it was wind versus break again and I just tried to take the wind out of play and just bomb it. Four footers are tough. You are trying to hook some in and hold off putts. It’s tough and I tried to bomb it.”

He added: “I was hoping today was going to be the day, but obviously it was not to be. You take the positives, you dust yourself off. You take a bit of confidence from it and see where it goes.”

Sharvin’s quest to add the Irish Amateur Open to his Irish Close title went down to the wire, only for the Ulsterman – a golfing scholarship student at the University of Stirling – to become the latest victim of the Garden.

Having opted to take a three-iron off the tee, Sharvin’s ball kicked left and finished on a grassy bank. Again, the three-iron was his club of choice. “I had to take it on, even though it was a one-in-ten shot,” he recalled afterwards. Unfortunately for him, he came out of it and the ball flew into the out-of-bounds area. It led to a double-bogey six, a costly price to pay.

“I got myself into a good position, hopefully I can seal the deal the next week . . . . it’s hard to take but these things happen to the best of us, you’ve just got to learn from it,” said Sharvin.

A scholarship
On a day when 18-year-old Paul McBride– who puts away the golf clubs in the coming weeks to sit his Leaving Cert with a plan to head over to Wake Forest on a scholarship come August – shot the best round, a 68 for 291 to move up to tied-seventh, it was Savage who closed the deal.

The Scot, indeed, closed in some style with a rescue club from 203 yards to 10 feet on the 18th. He missed the birdie putt, but that ultimately didn’t matter. He had avoided the pitfalls that befell others.