Ireland bidding to regain the title they last held in 2008 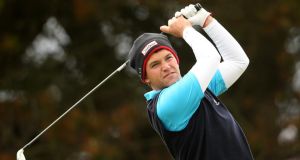 Rory McNamara was the best of the Irish on day one of the European Amateur Team Championships at Silkeborg with an opening round 70. Photograph: Cathal Noonan/Inpho

Ireland are in a strong position to claim a top flight spot at the European Amateur Team Championships, at Silkeborg in Denmark after a solid opening day performance.

Bidding to regain the title they last held in 2008, Ireland ended the day tied third with Scotland knowing another reasonable display today will take them into the last eight for the matchplay phase.

With five of their six cards counting, they finished on 371, 11 over par, 10 shots behind leaders France and three adrift of second-placed Germany.

Headfort’s Rory McNamara was Ireland’s standout performer with his two-under 70, including five birdies on the back nine.

Double bogey
Dubliner Paul Dunne who set a new course record at Princes in Kent during last month’s Amateur Championship, was one under on the final tee, but slumped to a double bogey six to finish on 73.

Mourne’s Reeve Whitson and Jack Hume both carded 75. Whitson produced a solid start, but a double bogey at the long par five fifth threatened to disrupt his rhythm. He recovered to shoot 11 straight pars before a bogey at the 17th.

Kevin Phelan, was left frustrated with his round of 78. Phelan who qualified for last month’s US Open and then completed all four rounds, triple bogeyed the fourth and never recovered, while Gavin Monyihan shot the highest score of the day, a disappointing 79.

Today the 16 teams are split into flights, with only the top eight sides able to then go on to possible glory.