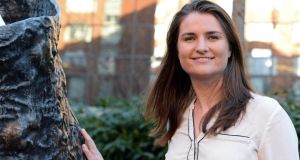 Former professional golfer Danielle McVeigh. Of playing so well through her father’s illness and following his death, McVeigh now believes she “just blocked it out”. Photograph: Eric Luke

A lot has changed for Danielle McVeigh. Here she is, sitting at the back of a coffee shop on South William Street in Dublin’s city centre, a mug of coffee in front of her.

She is leafing through The Color Purple, a book acquired on a visit home to her mother’s over the Christmas. Years ago she started to read the Pulitzer Prize winning novel by Alice Walker “to improve my vocabulary” but found the language from the American Deep South somewhat alien and not what she needed at the time. Now she is engrossed. A changed woman.

McVeigh is no longer a professional golfer on tour. As autumn turned to winter in 2013, the player hit her last shot for pay in a tournament in Spain and exited tour life stage left with no emotion or regrets. This week McVeigh was reinstated as an amateur with a handicap of plus-two.

The woman who fell out of love with golf is willing to embrace the sport again; but only on her terms, a sort of light-touch acquaintance with the knowledge that there is more, much more, to life than golf.

There was a time when the statuesque woman was seen as heralding in a new era for Irish women’s golf, a new poster girl as it were. Her CV was impressive, with wins in the Ladies British Amateur strokeplay championship, the World Universities, the Scottish and Welsh Opens and a superb Curtis Cup – just a month after the death of her father Thomas – in Boston in 2010. Lexi Thompson and Jessica Korda were among those on the victorious USA team that week, but McVeigh also more than looked the part.

What we’ve only discovered – and what McVeigh is only now able and willing to share – is that much of that time was spent suffering from depression.

There were what she recalls as “dark days” which were spent lying in bed; but, more often, days so full, scheduled from early morning until late at night, which she believes served as her own defence mechanism to combat the melancholy.

McViegh isn’t sure exactly when the depression first came. She does, though, recall playing in the British Ladies at Alwoodley Golf Club in Leeds and breaking down in floods of tears. That was back in 2007.

“That’s the first point I remember struggling with the whole thing. I hadn’t a clue what was going on. From then there was maybe some feeling of being weak on the inside but being perceived (by others) as being strong, and there was a bit of a gap there I was trying to deal with. It came and went. Most of the time I was grand.”

But there were days when McVeigh couldn’t get out of bed.

“I would be very close to my family but, back then, I certainly didn’t let them know how I was feeling. I was living away from home, so they didn’t know I was in bed for the day... in fact, I nearly did the opposite (to staying in bed) most of the time. I put so much into my day I didn’t have time to stop and think. I look back at some of the calendar diaries I kept, it was literally going from seven in the morning ‘til nine at night, nearly doing so much that I would forget everything.

“I think that would be quite common with sportspeople, that people can see you are still working hard so you don’t have to answer any questions. You avoid it all. I was giving myself no break, but that was only a short-term solution...being a top performing sportsperson you are perceived as being someone really strong and it is nearly that you don’t let yourself be perceived as weak. Everybody has bad days but as a sportsperson you are not suppose to let it be known, and I think that’s how things sometimes spiral out of control.”

Looking back it seems extraordinary what McVeigh achieved in the summer of 2010. She won the prestigious Helen Holm Trophy for the Scottish Open strokeplay championship and her father phoned to congratulate from his hospital bed. Sadly, he passed away before McViegh competed in the Curtis Cup where, despite featuring on the losing team, she was a towering presence and defeated Jennifer Song, now competing on the LPGA Tour.

Of playing so well through her father’s illness and following his death, McVeigh now believes she “just blocked it out ...I was going straight into exams and then the Curtis Cup the next week, so the best thing I thought I could so was forget about it. And I played nicely for a while, but it caught up with me.”

Came to a head

What was happening was that she had become, as she puts it, “very quiet, not up for the craic. I was not going out with my friends. Or, if I did, I was just sitting in a group of people, not saying anything, I’d just be in a haze...it took somebody else to say it to me, that there is something wrong here. If I had kept going like that, it would have been a much more serious problem.”

McVeigh went from one to another counsellor and then on to another before finding “light at the end of the tunnel,” as she describes it, with a third therapist.

And through it all she went ahead with the move from the amateur game to that of life as a professional. The Ulsterwoman got to the final stage of the LPGA Tour but missed out on a precious card and, instead, battled on the less financially rewarding Ladies European Tour and on the development circuits. “I felt like I still had to continue with turning pro because that’s what I was supposed to do.”

By now the sessions of counselling helped enormously. But the pressures of earning a living on tour became a different sort of challenge. Also, and somewhat ironically, McVeigh’s move into professional golf came at a time when she realised there were other options to her life. In her two years on tour, where expenses were often in excess of a grand a week, McVeigh shared car hire with other players, shared houses instead of swanky hotels and cooked their own food.

Giving up a career as a golf professional brought new opportunities as she reassessed her life. These days she is thriving, happy with life; working with software company based in Dublin. She is learning the guitar. Last year she went on holidays to Vietnam, bought a motorbike – which she crashed into a lamppost on the first day – and rode from Ho Chi Minh to Da Lat.

And she has picked up golf clubs again, but this time knowing golf is not the most important thing in her life.