I’ve arrived in Sotogrande, Spain eager to get going but after a really good week at home 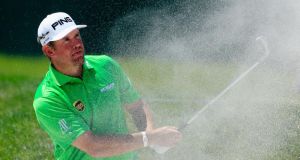 I’d always say that Lee Westwood – even though he isn’t playing too well at the moment – will always give you a run for your money.

Like most everyone else, I have Augusta on my mind. Unfortunately, I won’t be there. In fact, I’ve never been there. Not yet, anyway. Hopefully next year!

At the end of the day, for professional golfers, the Majors in golf are almost everything and it is where you want to be playing. You’re playing with and against the best players in the world; there’s just a completely different feel to the week. You want to be part of that scene.

If you win a Major, you’re put on a higher pedestal. So, who’ll win next week?

I know that I am going to have people coming up to me all the time over the coming week asking me who would I back and who I think is going to win the green jacket?

I’ll be brutally honest: I don’t have a clue who’ll win. But like a lot of people I’ll be glued to the telly – well, for three nights anyway, because I’ll be in the air flying to Malaysia when the final round is unfolding. Perhaps I’ll be lucky and there will be WiFi on the plane.There are worse problems in life.

Tiger’s absence is a bit of a “wow” factor for all of the wrong reasons. Of those who will be there, I’d always say that Lee Westwood – even though he isn’t playing too well at the moment – will always give you a run for your money in the Majors and especially at Augusta I think he’ll be there or thereabouts. Other that, maybe Dustin Johnson? Or Rory McIlroy, if his putting is good . . . but he is too short a price.

I’m sure that those lads who are playing in the Houston Open and who will be moving on to the Masters will be hitting shots this week that they wouldn’t normally be hitting with Augusta in mind. It’s all about getting that bit of extra confidence for next week.

Some day, I hope to have that issue of readying my game in the week ahead of the Masters. This week, I’m playing in the NH Collection Open in Sotogrande. It’s not on the old course, it’s on La Reserva which is a resort type course and quite hilly but good.

This time last year I was playing in Houston, not with one eye unfortunately on the Masters, and I would love to be there.

It’s a very big tournament in its own right. I don’t look over with envy or anything like that. Hopefully this time next year I will be there. That’s what you gear yourself up towards and that’s why you practise so hard, it is to get into the bigger tournaments.

Good week
I must say, I’ve arrived in Spain eager to get going but after a really good week at home.

In an off-week, I think it is important to get out and about rather than just sitting around and thinking about your golf. Last week, I managed to get to the darts at the O2 and also got to the Leinster-Munster rugby match at the Aviva. Two different sports but great fun.

I love going to sporting events and sometimes, the networking that operates on the golf scene can pay dividends. That’s what happened with getting to the darts tournament. We got tickets to the Point from Keith Deller, a former world darts champion.

Kenny Comboy who caddies for Graeme McDowell is a good pal of Keith who now works for Sky Sports and he sorted it out for us. We’d a good laugh and a great night. I’ve watched darts on telly a lot, especially around Christmas, and there were 10,000 people packed into the O2. I don’t think there was one person who could seeing the darts going into the board from where they were sitting, everyone was looking at it on the big screens. But it was great craic and a great atmosphere and it is something I’ve always wanted to go to.

Watching rugby
The rugby match was great too. It’s always good to get away and do things on a week off and I love watching rugby. I won’t rub it in too much to my Munster friends but the result was good too. Anyone who has ever seen me at an Offaly match or a Clara match would vouch for the fact that I’m inclined to let out a few roars. Let’s say I like to see my teams doing well. So it was on Saturday evening.

Things are a lot calmer here in Spain. Without taking anything away from the tournament, I see this as a decent practice week but also a chance to get into contention in a tournament. I played nine holes on Monday and nine holes on Tuesday and the pro-am yesterday.

There’s actually a very good field for what is a dual badge tournament (counting on the main tour and the challenge tour) and a lot of guys are hungry to get going again, me included. We haven’t played much in Europe this year. This is only my sixth event and it is April.

People are saying I’m one of the favourites this week. But for anyone to win you have to go out and play well and hit the right shots at the right time and hole some good putts. To win any tournament, that’s the way it is.

I know I’m one of the higher-ranked players in Sotogrande but you definitely don’t go out thinking of winning.

My plan is to use this week as good competitive practice, get four rounds in and, if I can be in contention on Sunday, that would be nice. If I can hit some good shots and do the right things, I’ll be happy enough.