‘Paul has played here since he was 10 years old, a very unassuming fella’ 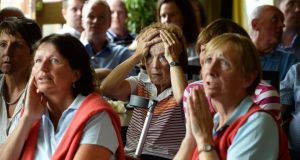 The meaning of the words “electric atmosphere” were aptly demonstrated this afternoon as a roar of pure joy ripped through the normally sedate surrounds of Greystones Golf Club.

Up to 200 members packed into the upstairs function and dining rooms broke their intense scrutiny of two widescreen televisions to rise as one with a cry that seemed to make the windows rattle as waiting staff struggled to keep hold of their trays of food.

As Paul Dunne tied with American Jordan Niebrugge at 12 under in the race for the silver medal at the Open Championship at St Andrews, Dunne’s home club heaved with overjoyed supporters.

“Paul has played here since he was 10 years old, he is very popular, a very unassuming fella who will go out with the juniors or anybody” said club member Conor Woods.

Fellow club member Joe O’Brien said the emergence of Dunne as a contender in the Open “means everything for the club”. It was the “biggest thing that ever happened to the club” he said, likening it to the club’s claim on Jimmy Martin, a former Ryder Cup player.

“He is wonderful” he said of Dunne before adding that he personally knew that the young man had sat at his breakfast table as a child, swinging his cutlery like a gold club, always practising. “It’s true, I have that from his mother and father” he said.

In a lull in proceedings, club president Via Maume said she expected life would be different for Dunne from this day forward. Ms Maume, with Lady Captain Jeanne Thorpe, took time out on the Club’s balcony to praise the young golfer’s “dedication and hard work” with Ms Thorpe describing his life as “transformed”.

“Well, if not transformed completely it is never going to be the same” she said.

Both women said they expected a lucrative professional career would be on the cards for Dunne, once this year’s Walker Cup was over.

Back inside the adjacent rooms had gone quiet. Australian golfer Marc Leishman rolled a short birdie putt in at the 12th to go to 16 under, leading by one from Scott and Johnson.

Nobody seemed to worry about Dunne’s position – for the Greystones Club it seems it was all about having one of their own in the competition. There was probably little work done in businesses around Greystones this Monday – and it looks as if Tuesday may be quiet too .