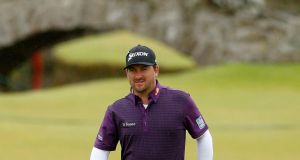 Graeme McDowell made a strong start to his third round in the British Open before stalling and signing for a 70. Photograph: PA

Torrential rain on Friday and strong winds on Saturday may have forced the 144th Open Championship into an extra day, but the Old Course at St Andrews was vulnerable to low scoring on Sunday.

Graeme McDowell has admitted the Old Course at St Andrews might need some “reshaping” to cope with the modern equipment.

“A lot of the bunkers are not in play any more, when you see the type of power that these guys are kind of using and putting on the golf ball,” said McDowell, who had eight birdies in his first 13 holes but also two double bogeys and two bogeys in a 70.

“You see an old test like this one and start wondering what they can do with it to keep it up to sort of modern times. I don’t think you’ve got to go put a ton of yardage on this golf course. The greens are its protection and unfortunately driving the ball is just too easy this week. I’m hitting driver nearly 14, 15 times out there.”

Eighty players made the halfway cut at level par, meaning the entire field was separated by just 10 shots, with American Dustin Johnson enjoying a one-shot lead over England’s Danny Willett.

The final pair were not due to begin their third rounds until 3pm, but former champion David Duval took full advantage of being in the first group out at 8:15am in damp, calm conditions to card a five-under-par 67.

Duval had recorded just one round in the 60s in the Open since shooting a closing 67 to win at Royal Lytham in 2001, the former world number having birdied the 18th on Saturday to make his first cut in the event since 2008.

“I expected to play well at some point,” said Duval, who spends more time commentating on golf than playing it these days. “I’ve been doing what I want to do for a long time, just not putting this together.

“The difficulties I face is not getting to play. Competing against the best golfers in the world is not a fair fight when I haven’t played a golf tournament in three or four months and they’ve been playing constantly.

“But I faced a challenge yesterday and it made me feel real good to do what I did. I hit the golf shots I needed to do on 17 and then three-putted like a fool, but then birdied the 18th knowing I had to, and that was cool.

“Because I missed the cut at Gullane (in last week’s Scottish Open), I’ve been at St Andrews since last Saturday every day playing golf. Who gets to say that, really? It’s pretty cool.”

The first sub-63 round in major history looked a distinct possibility despite a heavy rain shower hitting the Old Course at 12.30, with Australia’s Marc Leishman seven under for his first 13 holes and eight under overall.

And England’s Eddie Pepperell carded five birdies in his first six holes to improve to seven under, before a run of pars took him to the turn in 31. Pepperell had also picked up another shot on the 10th to move to eight under.

Compatriot Ashley Chesters, one of five amateurs to make the cut, was just a shot behind after following birdies on the second and third with an eagle from 40 feet on the fifth and another birdie on the eighth.

Leishman holed from 20 feet for his eighth birdie of the day on the 15th, meaning he needed to birdie two of the last three holes to shoot an historic 62.