Gavin Moynihan through to last 16 of Amateur Championship 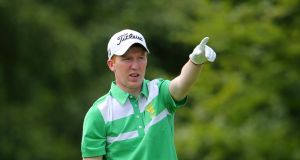 Dubliner Gavin Moynihan faces Frenchman Alexandere Daydou at Carnoustie this morning for a place in the quarter-finals of the Amateur Championship.

The Walker Cup star, who plays out of The Island, got through his first matchplay round by defeating Tom Gandy of Rowany 2&1 – although he now carries Irish hopes on his shoulders after Jack Hume and Dermot McElroy crashed out yesterday.

A birdie on the par four third hole was the standout of Moynihan’s outward half as he took a one-hole lead into the turn.

Gandy battled back to win the 10 th to square things up and then went one-up with a birdie on the 12th. But Moynihan was not going to be denied.

He soon levelled it again by winning the 13 th and then produced a magnificent eagle on the par-five 508-yard 14 th hole to edge back in front.

A Gandy bogey on the 15th gave Moynihan a two-hole lead, and, despite the Isle of Man player taking the 16th, the Irishman’s lead proved to be unassailable as another bogey from Gandy on the 17th allowed the Dublin star to close it out with a straightforward par.

Hume made par for eight of the first nine holes – bogeying the fourth – to take the lead after a birdie and four bogeys from Kuronen.

However the Finnish player turned the tie on its head with a stunning inward half where he didn’t drop a stroke, and also carded four consecutive birdies between 11 and 14.

It was Kuronen’s birdie on the 14th that saw him snatch the lead and, after making par on the next three holes, bogeys on 15 and 17 from Hume saw him bow out of.

It was also the end of the road for Ballymena’s Dermot McElroy, after he was beaten 5&3 by Englishman Jack Yule.

McElroy took an early lead after the Middleton Hall player conceded on the second, but was that as good as it got for the Irishman, as Yule hit straight back with a birdie to level things up and he led by two holes at the turn.

Both players collected a birdie on the back nine but Yule didn’t drop a stroke on his inward half and the Irishman then had two bogeys and conceded the 15th to exit the event..

Two rounds will be played today reducing the field to eight players for the quarter and semi-finals tomorrow.

1 Worst sporting moment: White knuckle ride on a hate-filled night at Windsor
2 Irish roots with the bit of Jo’burg dog: Curtis Campher has arrived
3 Dan Martin fractures bone in his back but still hopes to ride Tour de France
4 Rugby to return in England with rucking but no hugging
5 Acute disillusionment the only response to growing FAI debacle
Real news has value SUBSCRIBE

Delphi delivers Leger Trial success at the Curragh 16:47
Leona Maguire sits eight off the lead at Scottish Open 16:23
Aberdeen players ‘fined heavily’ for Covid-19 protocol breach 16:20
Dan Martin fractures bone in his back but still hopes to ride Tour de France 14:02
Frankie Dettori to miss York after opting to ride in France this weekend 12:41
Here is your handy guide to sport on television this week