Garcia and Montgomerie vent frustration at quality of greens 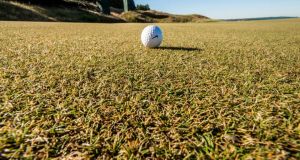 Greens at Chambers Bay, the 2015 US Open course, are predominantly fine fescue, but infiltrated by poa annua, which can lead to unpredictable bounces and explains the splotchy appearance. Photograph: Stuart Isett/The New York Times

As aesthetic as this reformed gravel pit has proven, with its undulations and expanse of bunkering providing for a picturesque setting, there has been one blot on the landscape here at Chambers Bay – the splotched appearance of the putting greens!

Sergio Garcia couldn’t hold his counsel, claiming they were “as bad as they look on TV”. Colin Montgomerie described them as extremely poor, and noted coach Butch Harmon said they were worse than temporary greens at anyone’s local course.

We all know that appearances, sometimes, can be deceptive. Wasn’t it Virgil, that ancient Roman poet, who wisely advised, “trust not too much to appearance”. He didn’t have golf courses in mind when he offered this advice, but the tale of this 115th edition of the US Open has, unfortunately so far, been about quality of the putting surfaces. Is this case, appearances aren’t deceptive.

Garcia took to social media to vent his frustration, claiming other players didn’t have “the guts” to criticise. “I think a championship of this calibre of @USOpenGolf deserves better quality greens surfaces that we have this week, but maybe I’m wrong!”

In most instances, players have kept a form of diplomacy. Henrik Stenson, not wishing to take anything from an opening 65, nevertheless claimed: “There’s a few of them that are struggling a little bit, numbers one and four are a little iffy and some other ones aren’t quite good. You are going to get a little bit of difference sometimes, but then again you get so many putts that are different anyway.”

As Phil Mickelson observed all players want consistency on the greens . . . and that is what they’ve been given, with the feel different from green to green, which, he said, could “wreak havoc on our touch”.

He added: “You can see it in the colour and maybe make some adjustments, that’s a big challenge for us. It’s the only thing that I could possibly say is not just wonderful [about Chambers Bay].”

The greens at Chambers Bay are only three years old, reseeded a couple of years after the 2010 US Amateur, and are predominantly fine fescue, but infiltrated by poa annua, which can lead to unpredictable bounces and explains the splotchy appearance. Last autumn and winter, as part of the preparation process for staging the US Open, six greens were closed or covered in the hope they would be in top shape for the championship.

In the run-up to the championship – a first US Open at the course – the USGA’s chief Mike Davis admitted there was “splotchiness” on between 12 to 15 greens, due the infiltration of poa. “From a colouration standpoint, they look very different. When you go to many other golf courses in the United States that have bentgrass green, you’ll have bentgrass and poa annua. They happen to be the same colour so they don’t stand out. But fescue is a very different coloured grass.”

So, it is all about appearances? May not, because the nature of the humps and hollows of links golf extend from the fairways into the greens. A number of greens – take the seventh and 18th – are extremely undulating, but Davis believes “these bumps and hollows can help the golfer, they can use it to their advantage . . . but other times, these slopes that were put in very much are defences in the golf course.

“The architect put [slopes] there that you’ve got to figure how to play around, over it, into it, whatever the case may be.”

In fairness to designer Robert Trent Jones jnr and his team, he took on board analysis from the staging of the 2010 US Amateur to tweak the course for this US Open. For instance, a shoulder was put in place on the first green so that fewer balls would run down to the 18th fairway.

And, in fairness to the USGA, the set-up has not been as tough as it could have been. The fairways are the widest in the history of the US Open.

And whilst the likes of Garcia and Monty have vented their frustration, not everyone has been quite so dismissive of the quality of the greens. As Geoff Ogilvy remarked, “we’ve played far bumpier greens at US Opens than this. Pebble Beach is one; in the morning, they’re great, and it all kind of changes in the afternoon when the sun comes out. When (Graeme) McDowell won (in 2010), they were pretty bumpy too.”

Lest we forget, Shinnecock Hills too had issues with greens, and the US Open is going back there in two years time.

Solskjær praises Pogba after strike sends Man United top 06:21
Andrew Porter ready to lay down a marker at Thomond Park 06:00
Joanne O'Riordan: Why I want to live a bit more like Ted Lasso 06:00
Garry Ringrose and Béibhinn Parsons honoured by Rugby Writers 06:00
Aisling McCarthy looking to develop on and off the pitch in Perth 06:00
Here is your handy guide to sport on television this week