Four-way tie at the top of Qatar Masters leaderboard 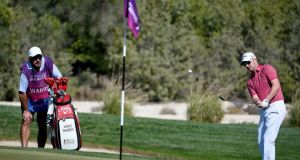 Scotland’s Marc Warren in action during the third round of the Commercial Bank Qatar Masters at the Doha Golf Club. Photograph: Ross Kinnaird/Getty Images

Scotland’s Marc Warren was one of four players to claim a share of the lead heading into the final day of the Commercial Bank Qatar Masters.

Warren shot a five-under-par third-round 67 in Doha to join South African Branden Grace, Argentina’s Emiliano Grillo and Austrian Bernd Wiesberger at the top of the leaderboard on 13 under.

England’s Eddie Pepperell was among the chasing pack after shooting a superb 65 to finish the day on 11 under alongside Alejandro Canizares and George Coetzee.

Another Englishman, Oliver Fisher, was alone in eighth on nine under after carding 69.

Warren’s only blemish came as he missed a short putt to bogey the 14th but he responded with back-to-back birdies at the 15th and 16th to maintain high hopes of a fourth European Tour win.

Warren said: “It was good, really solid today. I missed a few greens on the back nine but my short game held it together, with a few good iron shots coming in. Overall it was a really pleasing day.”

Grace bogeyed the third and fourth and hit further trouble when his tee shot at the fifth found the trees. But he somehow produced a superb recovery, despite not having clear sight of the green, to set up a birdie chance and provide the spark for a round of 68.

Wiesberger had a steady day and birdied the 18th to record a 68 after a visit to the rocky rough had seen him drop his only shot at 16, while Grillo shot a bogey-free 67.

Coetzee had a share of the lead after two rounds but fell back despite not dropping a shot in his 70. Canizares has not made a bogey in three days and maintained his progress with four birdies in his 68.

But the round of the day belonged to Pepperell. A day after his 24th birthday, Pepperell sank nine birdies and held the clubhouse lead as he signed for his seven-under-par round.

He was particularly impressive on the back nine, coming home in 31 with six birdies. He finished superbly by holing long putts on each of the last three greens.

He said: “I hit the ball well, better than I had the first two days, but I also putted better. I holed a number of good-length putts, 16, 17 and 18, they were all putts over 15 feet and nice ones to hole.”

The day was not a memorable one for defending champion Sergio Garcia, however. The Spaniard slipped right out of contention by dropping eight shots in a dreadful back nine, including a triple-bogey seven at the par-four 15th. His 77 left him 12 shots off the lead.

Peter Lawrie carded a one-over 73 and will go into the final round on five under, while Michael Hoey’s 74 left him back on two under.

1 Born to ride, born to win: Sam Bennett, the making of a green machine
2 Leinster look ready to step things up and burn off Saracens challenge
3 Will Connors now delivering on his massive potential
4 Keith Duggan: Surreal story of John Delaney needs to act as a wake-up call for FAI
5 Rory McIlroy battles to stay in the mix as Patrick Reed leads the US Open
Real news has value SUBSCRIBE