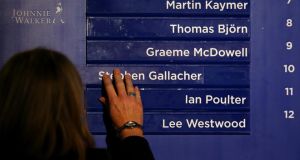 The names of Ian Poulter of England, Stephen Gallacher of Scotland and Lee Westwood of England are positioned in the final line-up of the European team as European Ryder Cup captain Paul McGinley of Ireland announces his three captain’s picks during a press conference at Wentworth. Photograph: Richard Heathcote/Getty Images

McIlroy finished top of both qualifying lists by a massive margin thanks to a brilliant season which saw him win the BMW PGA Championship in May and then record three victories in succession in the Open Championship, WGC-Bridgestone Invitational and US PGA Championship. Famously described the Ryder Cup as “an exhibition” the year before making his debut in 2010, but has changed his opinion since the narrow victories at Celtic Manor and Medinah, where he beat Keegan Bradley in the singles despite only arriving at the course with minutes to spare.

Effectively sealed his place on the team in November last year when he won the DP World Tour Championship in Dubai to become the first player to win the FedEx Cup and Race to Dubai in the same season. Has unsurprisingly struggled to reach the same heights in 2014 but was fourth in the US Open and third in the US PGA Championship, where he shared the lead on the back nine in the final round before a costly three-putt bogey on the 14th. Played in the record-equalling victory in 2006 but also Europe’s last defeat in 2008.

Won his first European Tour title in Turkey last year and followed that by finishing third behind Stenson in Dubai the following week. Made sure of his place in the team by finishing runner-up in the Accenture Match Play in February, producing some miraculous recovery shots in the final against Jason Day. An enigmatic figure who played in the junior Ryder Cup in 2006.

Secured his place on the team in style by winning the penultimate counting event, the Czech Masters, for his third European Tour title. Took a long time to break into the winner’s circle at the Irish Open in 2012 but then won in Abu Dhabi the following year and was second in both the Nedbank Golf Challenge and WGC-Cadillac Championship.

A talismanic figure for Europe, so much so that he was brought in as a vice-captain by Colin Montgomerie in 2010 despite becoming disenchanted with golf and taking a two-month break from playing. Won a crucial point alongside Luke Donald in the Saturday fourballs at Medinah and then beat Jim Furyk on the 18th in the singles. Has turned his previously weak putting into an asset and finished second to McIlroy at both the Open and Bridgestone Invitational.

Played all five matches at Medinah and birdied the final two holes to beat Phil Mickelson in the singles. Claimed his first major title the following year in the US Open at Merion — again denying Mickelson — and won back-to-back titles for the first time in his career in the Quicken Loans National and Scottish Open earlier this season.

Admitted his form was so poor that he would not have picked himself for the team two years ago, but qualified automatically and ended up securing the point which ensured Europe would retain the trophy with victory over Steve Stricker. Won both the Players Championship and US Open by leading from start to finish in 2014, equalling the lowest halfway total in major championship history with consecutive rounds of 65 at Pinehurst.

Has not played in the biennial contest since 2002 but brings vast experience to the side after acting as vice-captain in 2004, 2010 and 2012. Victory in the lucrative Nedbank Golf Challenge at the end of 2013 was the catalyst for his return to the side, which was sealed by finishing fourth on home soil in the inaugural Made in Denmark event.

Held on to the final automatic qualifying place by 1.61 points after Stephen Gallacher was unable to finish in the top two in the last qualifying event in Italy. Claimed the winning point with victory over Hunter Mahan in the final singles match at Celtic Manor in 2010, three months after winning the US Open at Pebble Beach. One of just three European players to lose in the singles at Medinah.

Successfully defended his Dubai Desert Classic title at the start of February but came into the final qualifying event needing to win or finish joint second with just one other player to dislodge Graeme McDowell from the side. Started second round 15 shots off the lead and after six holes was outside the projected cut mark, but stormed home in 30 for a 65 and shot 65 in the final round as well, missing out on joint second by a single shot.

Has earned the nickname of ‘Mr Ryder Cup’ and it is hard not to see why. Has twice needed a wild card, including in 2012, but has raised his game on every occasion and none more so than at Medinah. Won all four of his matches and famously birdied the last five holes alongside Rory McIlroy to beat Jason Dufner and Zach Johnson in the Saturday fourballs, after which he told his team-mates ‘We have a pulse.‘ Also beat Webb Simpson in the singles to take his record to 12 wins from 15 matches.

Finished seventh in the Masters in April and won in Malaysia the following week, but suffered a slump in form until a final round of 63 in the WGC-Bridgestone Invitational in August. The 41-year-old also shared the lead after the first round of the US PGA Championship before finishing 15th, but failed to advance after the first FedEx Cup play-off event. Boasts vast experience with eight consecutive appearances since making his debut in 1997.

1 Cheltenham faces criticism after racegoers suffer Covid-19 symptoms
2 Ian O’Riordan: Learning to run for the first time all over again
3 Coronavirus crisis could cost the GAA up to €60 million
4 Avoid the treadmill at all costs – marathon training in the 2km radius
5 My favourite sporting moment: Shels finally make all the heartbreak worth it
Real news has value SUBSCRIBE