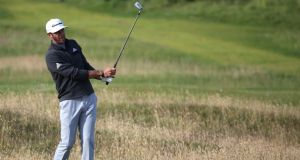 Dustin Johnson of the United States plays a shot from the light rough on the 17th hole during the second round of the 144th Open Championship at The Old Course in St Andrews. Photo: Streeter Lecka/Getty Images

Dustin Johnson has recent history on his side as he looks to end his run of major misery with victory in the Open Championship, which will finish on a Monday for just the second time ever.

Neither Darren Clarke or Shane Lowry will take to the course for that Monday finish however after both missed the level par cut.

Lowry did not play at all today after finishing his second round yesterday but his one over par total, after a quadruple bogey on the 17th on Thursday wasn’t enough to see him into the final two days.

For Clarke it was a late run of dropped shots that saw his Open challenge come to an end.

The 2011 champion looked to be comfortably inside the cut-mark before he went bogey-double bogey-bogey on the 15th, 16th and 17th to eventually finish at two over par.

A delay of 10 and a half hours forced the R&A to extend proceedings into a fifth day for the first time since Royal Lytham in 1988, with the third round scheduled for Sunday at St Andrews.

After a 7am restart on the Old Course, Dustin Johnson had seen his ball roll off the 14th green in winds gusting up to 45mph during the 32 minutes of action possible before play was suspended.

But when play eventually resumed at 6pm, the 31-year-old American completed a second round of 69 by driving the 18th green and two-putting for birdie to finish 10 under par, one ahead of England’s Danny Willett — who finished his 69 on Friday — and two clear of 1999 champion Paul Lawrie.

“This morning when we started it was almost impossible, but I managed to hang in there and then when we just went out and restarted it was very tough, but managed to make some good pars and then birdie the last hole,” Johnson said. “So it was a good way to finish the day.”

Asked about the incident on the 14th, where his ball was blown down a slope towards that of playing partner Spieth, Johnson added: “Fortunately it happened in kind of the end part of the second round, so we’ve still got a lot of golf to play, so it is what it is. Can’t do anything to change it.

“When I went up to mark it I got probably an inch from the ground. My coin was about to hit the ground when it took off. Then I went to mark it again and I think it took off again. And then Jordan was running to his ball. It was pretty funny.”

The last seven major winners have led or shared the lead after 36 holes, but Johnson has already let several chances slip through his fingers.

He held a two-shot lead early in the final round of the US Open last month but failed to convert an eagle attempt from 12 feet on the 72nd hole to claim the title and missed the return from four feet to miss out on a play-off with Spieth.

The world number four also took a three-shot lead into the final round at Pebble Beach in 2010 but collapsed to a closing 82, while a two-shot penalty for grounding his club in a bunker on the 72nd hole of the US PGA two months later cost him a place in the play-off.

Masters and US Open champion Spieth, who is chasing the third leg of an unprecedented calendar grand slam, did not think play should have started at 7am, but was also furious with himself for five three-putts in his round.

“It was an interesting round that took a lot of time, but it’s nice to look back on Saturday evening and instead of being five shots back with one to go, I’ve still got two full rounds, so anything can happen here,” the 21-year-old said.

“I believe I’m still in contention. I still believe I can win this tournament. I need a really solid round tomorrow, though, because Dustin is not letting up.

“Dustin is going to shoot a good round tomorrow with less wind and I’m going to need to shoot a great round to really give myself a chance.

“To fall from two back to five back isn’t exactly what I wanted, but it could have been worse, could have been better. If I can shoot something like 10 under in the last two rounds, I think I’ll have a chance to win.”

Asked about the pressure of trying to win a third straight major title, Spieth added: “When we’re out on the course inside the ropes, it’s just another event, and I’m working as hard as I can to get into contention and beat the best players in the world.

“I understand where we’re at off the course, but it doesn’t do any good thinking about that. It does better for me focusing on the task at hand. That’s what we did in the first two majors.”

Three-time Open champion Tiger Woods missed the cut at consecutive majors for the first time in his career and the frustration of doing so on his favourite course hurt even more.

The 39-year-old won two of his Claret Jugs on the Old Course but after finishing 23rd at St Andrews five years ago he never looked like getting past the first two rounds this year.

On Thursday morning he dumped his approach into the Swilcan Burn guarding the first and that set the tone for a miserable three days.

A second-round 75 followed his opening 76, his two worst scores on the course, and resulted in only his second missed cut in 19 Opens — the other being in 2009 in Turnberry.

Woods is a shadow of the former self which bestrode the historic links in 2005 and 2010 (finishing 19-under and 14-under respectively).

He maintains he is getting his game back in shape and even spoke fancifully of returning to St Andrews in 2020 in better form — but he is struggling to convince himself never mind his critics.

“I’ve won here a couple times. I wasn’t all that great in 2010. Obviously a little bit worse here in 2015,” said the American, who has slipped to 241 in the world and will fall further after this week.

“Next time it comes around, hopefully I play a little bit better than I did the last two times.

“I’ll probably have less hair then and hopefully a little better game.”

When the rest of the field were making the most of the easier front nine, which was mainly wind-assisted for the first two rounds, Woods failed to make a birdie going out.

He had only three birdies in total as he finished seven over, with the cut falling at even par.

“I felt like I was playing well enough to win this event,” he said.

“On the very first hole on the first day I ‘fat’ a sand wedge in the water; I ‘fatted’ my three-iron off the tee, and then I ‘fatted’ my eight-iron into the green on two; drove it in a divot on four.

“It was just one thing after another. I had my opportunities, I just didn’t get the ball close enough, and then when I did, I didn’t make them.

“It’s frustrating, there’s no doubt, because I’m not making those runs.

“To win major championships I’ve always thought you needed to have two good nine-hole stretches — they don’t have to be in the same day but you’ve got to have a nice run in there and I haven’t done that at all.”

After an assessment of what went wrong at St Andrews Woods will return to action in the Quicken Loans at the end of the month targeting a good performance in order to get back into the WGC-Bridgestone Invitational at Firestone — where he was won eight times in 16 appearances — the week before the USPGA at Whistling Straits.

“I have to keep going forward,” he said.

“I play in a couple weeks so I am looking forward to playing the Quicken Loans and hopefully winning that event so I can get into a place that I know very well.”

1 Keith Duggan: Through the glories and the disgraces, we were all Maradona addicts
2 Mourinho claims spending brings pressure as he travels to Chelsea
3 Klopp warns players not to use his complaints over schedule as an excuse
4 The day a 20-year-old Maradona led a League of Ireland XI a merry dance
5 November’s International Rules series is called off
Real news has value SUBSCRIBE

Buckley and Sligo ready to throw down gauntlet to the champions 23:00
Flanagan and O’Donovan named in Limerick side to face Galway 22:40
Klopp warns players not to use his complaints over schedule as an excuse 22:34
Mourinho claims spending brings pressure as he travels to Chelsea 22:30
Late Wilson and Joelinton goals help Newcastle storm Palace 22:20
Here is your handy guide to sport on television this week