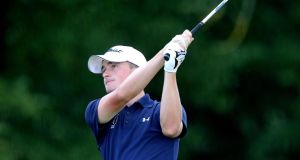 The conveyor belt is clicking away nicely, as evidenced at yesterday’s mid-point of the East of Ireland amateur championship at Co Louth Golf Club where Greystones’ Paul Dunne - a student at the University of Alabama, the alma mater of Graeme McDowell – shot a second round 68 to add to his opening 69 for 137, seven-under-par, to claim a four-stroke lead over Brian Casey, with another young gun, Stuart Grehan, a shot further adrift.

Apart from their pursuit of one of the most coveted titles on the circuit, the common thread is the trio’s annexation of the Irish Youths’ championship in successive years: Dunne set the ball rolling by winning in 2010, to be followed by Headfort’s Casey in 2011 and Tullamore’s Grehan last year in providing continued vindication of the developmental programme of the Leinster Branch.

Here, Dunne – a 20-year-old finance undergraduate at UAB – swapped the slick greens of the collegiate circuit for the rather slower surfaces of Baltray, which allowed him to be a tad more aggressive with the blade in hand. The upshot was an impressive display of putting which yielded seven birdies, five of which came in his final seven holes.

“An interesting finish,” he observed.

Putter red hot
Indeed, Dunne’s putter was red hot: he got up and down from 50 yards, holing 10-footers, on the third and fourth to kick-start his run for home and responded to a dropped shot on the fifth by grabbing birdies on the sixth, where he pitched dead, and seventh (from 20 feet) and ninth, his closing hole, again from 20 feet.

Of the greens, Dunne – who won back-to-back Irish Boys’ titles in 2008 and 2009 – remarked: “I find them nice, because they’re very true and are cut nicely . . . they’re a nice speed. In America, I’m used to (greens) a little bit quicker, so it means I can give them a go (here) without being too worried about the one back. It lets me be aggressive from the 10 to 20 feet range.”

He added: “I will just go out and try to do the same thing (for the final 36 holes), pick my targets, hit shots and try and accept where it goes.”

Dunne’s aggression reaped dividends, although his pursuers – familiar foes from his youths’ days – have shown their own propensities for finishing jobs when in contention. “My plan is just to go back to old times when I was able to close it out, to come from behind and sneak up a little bit . . . hit fairways and greens, it’s a course where you have to be clever,” said Casey.

Casey, who played the course the right way round, got off to a fast start in shooting a 69 for 141, three under, that featured four birdies in his opening six holes, while Grehan, who is studying at Eastern Michigan, had successive 71s to move into contention.

Gary McDermott, who undertook a practice round recently with Des Smyth and Declan Branigan to pick their brains, showed the merit of such preparatory work by claiming seven birdies in a second round 68 for 143 that moved him into a group six shots behind Dunne.

“I didn’t win the money but got a lesson,” quipped McDermott of that outing with the two veterans.

The midway cut fell on 150, with one player – Matt McKnight – failing to survive on that mark.

1 Georgia and Fiji in line to join Six Nations sides in eight-team tournament
2 Ken Early: Another Mourinho masterclass in going through the motions
3 Serge Aurier’s brother reportedly shot dead in France
4 All in the Game: Jack fact-cheques money story
5 Malachy Clerkin: Sleep well Jack, you made us all happy
Real news has value SUBSCRIBE

Serge Aurier’s brother reportedly shot dead in France 19:01
Stephen Scullion: ‘Athletes will do long-term serious damage chasing those results’ 18:00
Georgia and Fiji in line to join Six Nations sides in eight-team tournament 15:28
Shamrock Rovers receive bye in first round of FAI Cup defence 13:16
Manu Tuilagi to stay in England after signing for Sale 12:48
Here is your handy guide to sport on television this week