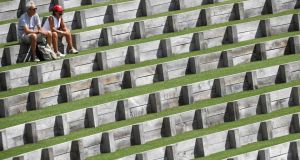 A view of the seating area around the 13th green during the pro-am event prior to the Omega European Masters at Crans-sur-Sierre. Photograph: Ross Kinnaird/Getty Images

US Masters champion Danny Willett hopes the prospect of successfully defending a title for the first time in his career can inspire a return to the top of his game in the Omega European Masters.

Willett has endured a mixed campaign since claiming his first major title in April, missing the cut in three of his nine events and recording a sole top-20 finish in the BMW PGA Championship after sharing the halfway lead.

The 28-year-old also snapped the putter he used at Augusta National in frustration during the US Open and could only finish 53rd in the Open, 79th in the US PGA and 37th in the Olympics.

However, the world number 11 is a big fan of this week’s venue of Crans-sur-Sierre in the Swiss mountains, where he carded a brilliant closing 65 to finish a shot ahead of compatriot Matt Fitzpatrick last year.

“I love this week,” Willett said. “I think I’ve played now for six straight years and it’s always great to come back. There’s always a little buzz when you drive up the mountain and you see the signs as you approach.

“It’s been a crazy 12 months and this win last year really kick-started my little effort back in Europe. I finished sixth at The Open and then came here and won and didn’t really look back after that.

“Unfortunately I finished second in The Race to Dubai, but then I came out this year, won in Dubai and then the Masters.

“It’s been a pretty epic 12 months and the golf hasn’t been fantastic over the last two or three months, but I’m just trying to get everything back on track now. I’m working really hard and hopefully coming back to a place I like and feel comfortable on and hopefully I can have a good week here.”

Willett and Fitzpatrick will play the first two rounds together in Switzerland, along with a third member of this year’s Ryder Cup team, Andy Sullivan.

The trio all qualified automatically for the European team which will attempt to secure an unprecedented fourth straight victory at Hazeltine, a team completed on Monday by captain Darren Clarke’s wild-card selections Lee Westwood, Martin Kaymer and Thomas Pieters.

“I can’t wait for the Ryder Cup,” Fitzpatrick said. “It’s going to be an amazing experience. If someone told me two years ago I would be playing it I wouldn’t have believed them — I didn’t even have status then.

“I wasn’t nervous when playing the Walker Cup (in 2013). The big thing for me that week was that I’d just come off the US Amateur win, I was the number one amateur in the world as well so I felt like I was very high in confidence. I didn’t really have much fear.

“It’s a bit different at the Ryder Cup, I’m not number one in the world so I’m not expected to do anything special. It was a big thing that I played my way into the team and didn’t need a pick, that was nice. To get it finalised with one event left was a great feeling.”