He was a fine golfer, but Junior will be remembered for the way he made people happy 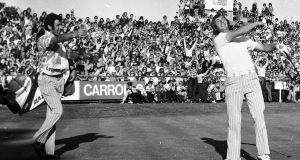 Christy O’Connor jnr throws his ball to the crowd after winning the Irish Open in Woodbrook in 1975. Photograph: Kevin McMahon/The Irish Times 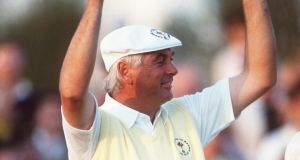 Christy O’Connor jnr after clinching victory for Europe in the Ryder Cup in 1989. Photograph: Billy Stickland/Inpho

Remember the Burt Bacharach song, Trains and Boats and Planes? That was the European Tour for the first decade of its existence after it was formed by the players in 1972 with John Jacobs and Ken Schofield at the helm.

The pros travelled together as a family for the 26 or so weeks that we played “on Tour”. We shared cars, practice balls (which we picked up ourselves) and rooms, but most of all we shared true friendships that have lasted a lifetime.

There were fewer distractions in those days. Times were slower and there were fewer demands on players. The gentlemen (and woman: there was one) of the press were part of that family and were fully respectful of privacy. The different nationalities hung out together in groups: the Spanish, British, Celts and Paddies, Scandinavians, Aussies and South Africans. Naturally some blended together better than others.

When Junior was around everybody wanted to be in his gathering at night, as there was always more laughter and fun to be had. It was never lonely, unlike the scene I would witness years later as a manager of players on the USPGA Tour where room service ruled. Europeans playing over there in those days found it unbearable, and it was the reason many didn’t make it.

The prize money back then was small and everybody lived from week to week, sharing, lending, helping. You had to finish in the top 10 to make a profit and a regular caddy was a luxury few could afford.

The superstars of the day back then were Christy O’Connor snr (Himself), Neil Coles (Old King Cole) and later Seve (Severiano Ballesteros). Christy snr was seen as the don and acknowledged as the greatest shot-maker of all with the fearless courage of a lion in battle. He was a generation older and a father figure to all but most especially to Junior, whom he loved.

Junior adored his Uncle Christy like a son and in return the maestro bestowed the hidden gems and secrets of the game on to his nephew. He had learned these hitting 10,000 shots and more on the barren winter links in Bundoran.

While Christy snr’s swing was a rhythmic sight to behold, Junior’s wasn’t so pretty but it was effective and efficient. It also helped that he had a silky, golden touch on the greens which if his uncle had possessed God only knows how many Majors he might have won.

He came so close to winning the British Open in 1985 and had to wait until 1999 and 2000 to get his hand on the “elder” Claret Jug with his wins in the Senior British Open on home turf. Those wins, along with his iconic two-iron shot in the Ryder Cup and his Carroll’s Irish Open win in front of his home crowd in 1975 at Woodbrook were the sweetest of all in his long and successful career.

He will not, however, be remembered just for his golf, but also for the mark he left on the world and the thousands of people he touched along the way in his rich life.

I had the privilege and pleasure of travelling with Junior for 10 years on Tour and witnessed first-hand the way he made people smile and happy more times than I can remember.

If you were to sit down and imagine what the quintessential Irish ambassador should be, it would be Christy jnr. He was a gentleman, a natural musician, a singer, a joker, a family man, a great friend, a feared adversary, sensitive and humble. Above all he carried a smile and laugh with that Irish cock of the head and “divil may care” way that was infectious and lovable.

Many would look on in amazement at Junior when he got going, especially in a “session”. I remember vividly when, in 1977, we were all stuck in the cafeteria in a quiet Geneva Airport on a Sunday night. Junior pulled out his famous spoons and started a céili session with a couple of other Irish he had met and lit the place up.

Seve had just won the Swiss Open by three shots and was sitting alone away from the group with the trophy in his lap. He was gazing over in awe and delight at what Junior was doing, secretly loving it but sadly unable to allow himself to be part of it.

Junior, in turn, loved the way Seve played golf. It reminded him of his uncle’s raw talent, but it was even better.

Jack Nicklaus, like Seve, also loved to be in the company of Junior. Why? Because he made them happy and they always laughed with him.

Eamonn Darcy knows what he was like. They were inseparable on Tour: “You can’t have one without the other” as that old song goes.

Most of all, Junior will be missed by his family. My favourite picture of Ann, his wife, whom he loved deeply, was of her “consoling” him when he broke down in tears after beating Couples in that famous Ryder Cup match; she was “always by his side”.

It is sad and shocking that he left us so suddenly, as you never expected Junior not to be around. Few men I have met lived every day as if it were his last and touched so many people in such a positive way as Christy O’Connor jnr.

You left your mark, Junior, and we celebrate your life.

2 Discipline may be key as Leinster take aim at Exeter