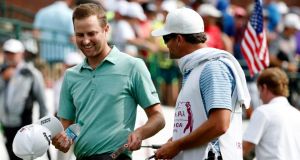 Chris Kirk celebrates on the 18th green during the final round of the Crowne Plaza Invitational at the Colonial Country Club in Fort Worth, Texas. Photo: Scott Halleran/Getty Images

Ian Poulter is still waiting for his first strokeplay victory in the United States after Chris Kirk won the Crowne Plaza Invitational.

Poulter, who was recently voted the most over-rated player on Tour by his peers alongside Rickie Fowler, came into the final day one shot off the lead and stayed in contention throughout as he finished on 10 under.

But he could not keep pace with Kirk who finished with a 66 and one shot clear of Jason Bohn, Jordan Spieth and Brandt Snedeker on a day played largely in torrential rain.

That sealed a fourth Tour win for Kirk on a tense afternoon which saw 14 players within two shots of the lead at one point.

“Just to be a part of the history of this tournament is really just amazing to me,” Kirk told Sky Sports 4.

“I was as nervous as I’ve ever been today for sure, those up and down on the last couple of holes and especially making that putt on 18 was pretty sweet.”

He added: “It didn’t really feel like I was swinging that great early on in the week but somehow I was able to get it done.”

A run of six birdies from the second to the seventh catapulted Bohn into contention but the action really got going as the leading group approached the turn.

Poulter and Kevin Na were both one under for the day through eight with a congested leaderboard behind them before everything changed on the ninth.

Both men found the water with their second shot and while Poulter hit a beautiful approach to limit the damage to a bogey, Na doubled and a birdie from Charley Hoffman meant all three men were in a group at 10 under, one shot behind Bohn.

Snedeker then birdied 10 and 11, the latter after his third shot had spun into a sprinkler head, and Bohn bogeyed 15 to all of a sudden hand Snedeker a two-shot lead.

Birdies for Bohn at 16 and Spieth at 13 moved them to within one shot of the lead while Poulter showed off his famous scrambling skills with a par on 11 after a wayward tee shot and clattering into a tree with his second.

A bogey for Snedeker on 13 meant four players held the lead and a tense finish was in store.

Spieth bogeyed 16 to drop out of the leading group and Kirk’s birdie on 15 meant he was out in the lead on his own.

A birdie on the last from Speith meant he joined Bohn with the clubhouse lead as did Snedeker with a par on the last, handing Kirk a par putt to finish 12 under.

And he holed from seven feet to seal victory with Poulter unable to produce any late heroics as Na fell back to nine under alongside Hoffman.

Continued absence of anti-doping tests for GAA intercounty elite 06:44
Irish contribution to Ali-Frazier bout that brought the planet shuddering to a halt 06:00
Her Sport putting women’s sport firmly centre stage 06:44
I, Tonya reveals a deeper truth than Harding’s level of guilt 06:00
Irish prepare for tough opening skirmishes at European Indoors 06:00
Here is your handy guide to sport on television this week