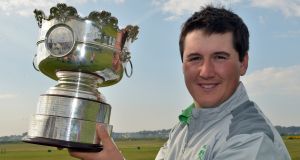 With Royal Dublin at her Sunday best, the Flogas Irish Amateur Open produced one of the most entertaining final afternoons since it was first staged 124 years ago.

For a while, it looked as though the eventual champion Colm Campbell would suck all the excitement out of the day as he stood up on the ninth tee two under for the round and six strokes ahead, as he rifled another bullet into the heart of the green.

By hitting an eight iron to three feet at the ninth, he made the first of five birdies in the last 10 holes that almost gave 29-year-old Campbell and his loyal band of followers from Warrenpoint nervous breakdowns.

Campbell, the 2014 East of Ireland champion, looked to have his second major title in the bag when he holed a 25 footer for birdie at the 17th to go two ahead on 16 under par, and then hit a seven-iron to 30 foot at the last, with Hume 20 yards left, just off the green

But Hume would not go quietly, and opting to putt rather than chip off a bare lie, holed a double-breaking 60 footer for birdie and a 69 that set the target at 15 under par 273.

Campbell had two putts for the win and duly took them, lagging his downhill birdie putt up to just two feet before tapping in for a 70 and a winning, 16 under par 272 total. This gives him a start, alongside Hume and one other Irish amateur, in next week’s Dubai Duty Free Irish Open at The K Club.

“I’m thinking don’t three putt,” Campbell said when asked what it was like to stand over his 30 footer following Hume’s 60 foot special. “Don’t leave myself a three, four footer. To be fair it was a nice putt, it was downhill, sort of wee bit of right to left. It was a nice putt to be able to tap in and become the Irish Amateur Open champion.

“ made two really good swings on 18. I hit a really nice rescue off the tee and hit a lovely seven iron from 190 yards into about 25 or 30 feet. And then Jack does what he does.”

Campbell, who also won wire-to-wire at Baltray in 2014, holding off Paul Dunne for the East, was proud to edge out a star like Hume and put himself in the frame for selection for Ireland’s six-man European Team Championships squad and the three-man Eisenhower Trophy side.

“It shows I’m heading in the right direction,” said Campbell. “If you can hold guys like Jack off, who’s a phenomenal player . . .who knows what can happen in the near future.”

Hume blamed his slow start for his defeat, with bogeys at the third, where he three putted, and the fifth, leaving him with too much to do.