Book of condolences to open for Christy O’Connor jnr

Golfer, a native Galwegian, was made a Freeman of the city in 2000 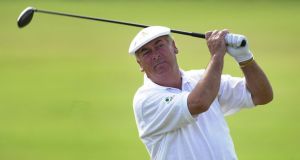 A book of condolence will be opened in Galway for Christy O’Connor jnr to allow people in his native city express their sorrow at his death.

The golfer, like his 91-year old uncle Christy snr, grew up in Knocknacarra on the west of the city, close to Galway Golf Club in Salthill.

Mayor of Galway Cllr Frank Fahy (FG) has called a special meeting of the local authority for tomorrow afternoon, when the book will be opened.

Christy jnr was made a Freeman of Galway in 2000 and Mr Fahy said yesterday his death had caused widespread shock in the city and county.

Former mayor John Mulholland, a close friend of the golfer since they were young boys, said: “It’s hard to imagine being without him. He was a marvellous man to be in his company and he was everyone’s favourite.

“He was so positive in everything. He couldn’t see any danger anywhere and the only thing that rocked him to his heels was when his poor son Darren got tragically killed in Kilcolgan in 1998. That was terrible at the time,” said Mr Mulholland.

Another close friend, former Fianna Fáil minister Frank Fahey, said Christy jnr was generous with his time for everyone and had contributed an enormous amount to charities.

“He was everyone’s friend – he had a good word to say about everyone. He was great company and we shared many great moments together. I just can’t believe he is gone,” said Mr Fahey.