Bill Haas plots his own Masters route at Augusta 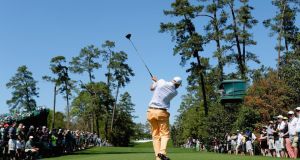 Bill Haas of the United States hits his tee shot on the 18th at Augusta National. Photograph: Harry How/Getty Images

You just never know, not here; not on this majestic course with its whimsical moods. If the 78th edition of the Masters swung into life with gloriously blue skies overhead and the smell of wild flowers in the air, picture perfect in fact, and the prospect of some low scores, the first round brought a demonstration of how the course could give with one hand and take with the other. A balancing act, keeping players on their toes and minds alert.

Although Bill Haas, whose family is indelibly linked with Augusta National’s past, strode to the first round lead with a well-crafted 68, four under par, there were others who suffered at the hands of a course set-up that featured some tricky, if downright nasty, pin placements and a swirling wind that served to accentuate the importance of proper club selection and execution.

One of those to fall victim to its whims was Jason Dufner, the reigning US PGA champion. Eight months on from claiming the Wannamaker Trophy, Dufner – seeking to claim back-to-back Majors – incurred a quadruple bogey nine on the par-five 13th en route to signing for an 80. His quest, it would seem, over before it really begun.

Phil Mickelson, for his part, suffered a triple-bogey seven on the seventh hole which was later compounded by a double-bogey on the 15th; while others found different kinds of trouble: Brandt Snedeker’s 70 included a penalty stroke on the 13th when his ball moved before he hit a chip shot, and recent tour winner Steven Bowditch called a penalty on himself when his ball moved in the pine straw to the right of the ninth fairway as he prepared to play his approach.

A number of first-timers managed to manoeuvre their way onto Haas’s tailcoats, among them Jimmy Walker, already a multiple winner on the US Tour this season, Kevin Stadler and Sweden’s Jonas Blixt, among a large group who shot opening rounds of 70.

However, the closest pursuers of Haas offered familiar faces. Bubba Watson. Louis Oosthuizen. Adam Scott. Men who know their way around this course, year-in and year-out.

As it happened, Scott, the defending champion, was one of those also served a reminder of the course’s propensity to punish any lapse in concentration. The Aussie was rolling along nicely, taking up where he finished a year ago, only to incur a double-bogey five on the short 12th.

“I hit the one poor shot on 12, which obviously cost me a couple of shots. But I’m very pleased to get off to a good start, and there’s no doubt winning the Masters last year had me a little more comfortable on the first tee than I’ve ever been in the past. I didn’t have the legs shaking and nerves jangling for six or seven holes like usual, so that was enjoyable,” said the Aussie.

Scott recovered to sign for an opening 69, one behind Haas, but that double-bogey in the heart of Amen Corner served as a reminder that this course asks questions from beginning to the end with any lapse in concentration punished.

The 12th proved to be a tough proposition, with the wind swirling and causing difficulty with club selection. Time and time again, players backed off their tee shots. as Scott observed of the difficulty, “It’s just that back right pin spot. I wasn’t even paying attention to it and it got me I wasn’t trying to hit it over there . . . .I just lost a little focus on that shot and didn’t commit fully it and you paid a price on that one. That was what happened to me.”

“It was a tough set-up. I think that they really wanted to do that, they didn’t want scores to get too low,” observed Rory McIlroy - who shot a 71 for one under par - of a course set-up that placed a high emphasis on pin locations.

Haas, a winner on tour for the past four successive seasons but still yearning for a maiden Major, didn’t encounter too many problems. The 31-year-old American opened with a 68, four under par, to assume the clubhouse lead to maintain the form he showed in Houston last week. On that occasion, he failed to see the job through and fell down to eventually finish a distant 37th.

Yet, given the family connections with Augusta, and his desire for a first Major, Haas is determined to avoid a repeat.

His connection with the Masters dates back to his great-uncle Bob Goalby, who won in 1968. “I think it’s a special place in our family since then,” added Haas, whose father Jay played in the championship on 22 occasions. Another two of his uncles, Jerry Haas and Dillard Pruitt, also got to play in the Masters. “We’ve had a bunch of family play here.”

Indeed, this Masters has the first father and son competitors at the one time – in Kevin Stadler and his father Craig – and Haas explained the pressures associated with being a son following in the footsteps of a father who was also a tour professional.

“The odds of getting out on tour are small. And then you take it down to how many tour players have sons and then how many have sons that even like golf; and then if you like golf the best part about this game is that you have to earn it. Kevin Stadler and myself and other players that followed in their father’s footsteps, they didn’t get to have their father hit shots for them. So it’s the most rewarding and sometimes the most difficult part about our sport,” said Haas.

Haas has had his moments on tour, his most recent win coming in last year’s AT&T National at Congressional, but the quality of those players in pursuit will need for a steely nerve as he ventures forward. It gets harder from now on in.