Adam Scott opens the door to challengers in Honda Classic 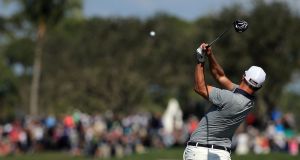 Adam Scott of Australia hits his tee shot on the sixth hole during the third round of the Honda Classic. Photo: Mike Ehrmann/Getty Image

Adam Scott survived a nightmare 15th hole to move one step closer to a 12th PGA Tour victory as he ended the third round of the Honda Classic in a tie for the lead with Sergio Garcia at Palm Beach Gardens in Florida on Saturday.

Three strokes off the pace overnight, Scott surged three ahead with a barrage of birdies on the challenging PGA National layout until he ran up a quadruple-bogey seven after twice finding water, first from the tee and then from the drop zone.

However, Australian Scott rebounded with a birdie at the par-three 17th before parring the last to card a four-under 66 for a nine-under total of 201.

His playing competitor Garcia, bidding for a ninth PGA Tour win, sank a six-foot birdie putt at the par-five 18th to shoot 67 and join Scott at the top of the leaderboard.

American Blayne Barber (69), a rookie on the PGA Tour last season, was alone in third place, four shots behind.

Three birdies on the back nine helped Graeme McDowell move into the top 10 on three under following a round of 67. The highlight came on the fearsome 17th, where the former US Open champion hit his tee shot to within three feet and duly holed the putt for a rare birdie in the Bear Trap.

“It’s pretty rowdy back on that 17th tee today,” McDowell said after his round. “It’s pretty fun, so it was nice to hit a shot like that.”

Shane Lowry finished on one over while three dropped shots in the final four holes saw defending champion Padraig Harrington fall down the leaderboard on two over.