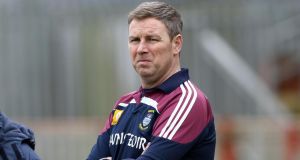 Westmeath manager Paul Bealin: There is probably a lack of leadership in my team at the moment. There are players who played well but not for 70 minutes. These guys will have to ask themselves some hard questions. Photograph: Inpho

Considering Westmeath and Louth stumbled off winless league campaigns, the championship can not come quick enough for both counties.

Neither squad has fallen into despair, keeping themselves hardy until 7pm on Saturday night in Mullingar’s Cusack Park when redemption will be at hand for one of them in their Leinster SFC preliminary round clash.

Westmeath manager Paul Bealin, the former Dublin midfielder, wasn’t long discovering his charges were ill-equipped for the Division One elite. Seven from seven defeats started with an eight-point loss to Cork but it was the manner of other dismissals that left Bealin sifting for positives.

Somehow, he took profit from a 13-point loss to Derry, and being 14 points adrift of Tyrone or even the jarring end, a 16-point drumming from Kildare that ensured their best showing was the four-point loss to Dublin in February.

Competitive
“We were competitive in many of these games but just couldn’t close it out against the Division One teams,” Bealin explained. “Their bigger squads told and clever use of their bench in the last quarter of games really told.”

Considering the calibre of opposition in Division Two, Aidan O’Rourke’s Louth were arguably worse when losing five and drawing two – Armagh and Galway – of their spring fixtures. The most humiliating defeat of all was the 4-16 to 0-9 final scoreline in Newry on March 1st.

“I’ve seen teams before having impressive league campaigns but it comes to nothing in the championship,” continued Bealin. And vice versa.

“What scares me a little bit is Louth went down to Portlaoise last year and beat Laois by 10 points. Nobody saw that coming. Four years ago they were in the Leinster final. There are a few of those guys still around. Much more mature than our guys, who have an average age of 23.”

When strength and conditioning coach Barry Whelan got hold of them last November only “40 per cent” of the group were approaching acceptable standards for an inter-county player.

“Look, it was a good learning curve to play the top five teams in the country as they are miles ahead of everybody else. When we dropped down to play challenge games (against Galway and Wexford of late) you could see that in Division One a mistake anywhere on the field is punished. Every time.

“When you get turned over by Mayo, Tyrone, Cork, Dublin or Kerry the ball is moved from box to box very quickly.”

Bealin cited Donegal and the programmes put in place by Jim McGuinness since 2011 as the prototype middle-tier counties must aspire towards.

“The first step is to gain some momentum and that will come from winning in Cusack Park on Saturday night.”

It starts with the veterans leading younger players into the light. Bealin identified this as a serious problem during the league.

“There is probably a lack of leadership in my team at the moment. There are players who played well, but not for 70 minutes.

Hard questions
“These guys will have to ask themselves some hard questions. We’ve some fantastic players, we really, really have. A leader, for me, is a guy who not only steps up and performs but brings the team with him.

“The John Heslins, Denis Glennons, Dessie Dolans are fantastic players who lead for their clubs. Kieran Gavin, Paul Sharry, David Duffy are guys that have the potential to be natural leaders. Now they have to do it on Saturday.”