Waterford must start again from bottom of mountain 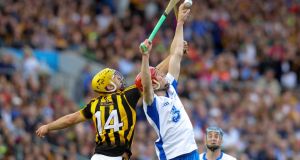 No one wants to hear a sentence that begins “if it’s any consolation . . .” So Galway, and Waterford, I’m happy to tell you there’s no consolation whatsoever from your defeats last weekend. None. I get the impression that’s pretty much how you would see it too, but I’m sure it hasn’t stopped people talking to you all week, telling you how close you are to the big breakthrough.

Waterford gave Kilkenny plenty of it, for two and a half hours of truly thrilling championship hurling, and all that separated them was the go-go-gadget arm of Eoin Murphy in the Kilkenny goal. Galway were just as close at the end of their semi-final against Tipperary.

A team’s development is seldom incremental. “Paying your dues” is not a concept that necessarily translates to sport (well, you can pay them all you like, but the ultimate reward for all that effort is far from guaranteed).

The plain fact is that Waterford may never get a better chance to beat Kilkenny. Waterford are a younger team and are progressing at an exciting rate, but there’s no guarantee Kilkenny are going to get any worse between now and, well, the next major climactic shift that will likely end the human race’s stay on this planet.

Derek McGrath seemed to realise as much. “There’s no consolation going toe to toe with an empire if you like, you know we’re here to win the match and we weren’t able to do that. The level of devastation is huge and we’re as far away from a semi-final now as we ever were and that’s the reality of sport.”

Nevertheless I listened to plenty of people say on Saturday evening that Waterford had arrived, and that it was only a matter of time before they won the big one. It may well be the case, but there’s ample evidence to suggest it won’t be quite so simple. Look at Limerick.

They were Munster champions in 2013, and they had their foot on Kilkenny’s throat for long periods of an All-Ireland semi-final in 2014. They were patently the better team that day, but Kilkenny scored goals at crucial times and Limerick were unable to finish them off.

Limerick didn’t start the following season within a puck of a ball of Kilkenny. They started at base camp, just like everyone else. Past performance is not an indicator of future performances, as your bank is always eager to tell you.

Clare won their All-Ireland in 2013, and we were supposed to be entering the next great era of domination.

But as more and more time passes, we have to acknowledge their ability to grasp the nettle at the key moments three years ago.

If they had lost that final, if Domhnall O’Donovan hadn’t landed that point from half-way to the Clonliffe Road to equalise the first day, you can be sure they would’ve been told over and over how it was “only a matter of time” before they won the big one.

In the days and weeks that followed that stunning replay win, they were as sure a thing as you could have in Irish sport. But that’s not how it’s worked out. They might only get one chance – at least when they were presented with it, they had the wherewithal to grab it with both hands.

Tipp were in a similar situation after their under-21s and seniors won All-Ireland finals a week apart from each other in 2010. They were the undisputed kings of hurling – and they haven’t won an All-Ireland at either grade since.

Tipperary are not a county that go looking for consolation after a defeat (it’s more usually a scapegoat), but they haven’t been the best team in the country in any of the years since, and they haven’t won the big one.

Wishing for a thing doesn’t make it so. Working hard for it doesn’t even necessarily make it so, either.

Kilkenny’s greatest gift to the game might be the realisation for everyone else that for as long as they’re around, there’s no such thing as an easy All-Ireland.

For Galway and Waterford, – and for Tipperary too maybe in three weeks’ time if they fall short – the only consolation, if they’re in the market for it, is that the message for next year is clear – just get better. Everything else is just noise.

1 Kevin Babington: Learning to live again after life changed forever on Long Island
2 Diminished Dele Alli shows the gulf between talent and expectation
3 Can Thiago bring the right dynamics to save Liverpool from entropy?
4 Tour de France: Every yellow jersey winner must feel guilty by some association
5 Matt Williams: The sky is not falling in on Irish rugby - but Ireland do need a new plan
Real news has value SUBSCRIBE

Japan’s new prime minister insists Tokyo 2020 will go ahead 10:28
Diminished Dele Alli shows the gulf between talent and expectation 09:00
Can Thiago bring the right dynamics to save Liverpool from entropy? 09:00
Sam Bennett: ‘A green jersey in the Tour de France is such a highlight of my career’ 07:30
If soul-searching was a sport, today’s GAA teams would all be champions 06:00