The joys of Wexford: The first to win four All-Irelands in a row 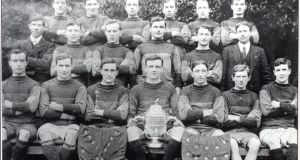 “He was a giant of a man, like,” says Phil O’Kennedy of his uncle Seán, who is generally regarded as the irrepressible spirit behind the stunning four-in-a-row achievement of the Wexford football team, which celebrates its 100th anniversary this year.

Because Wexford has become more associated with hurling through its agonies and near things of the 1970s and the incandescent summer of 1996, the enormity of that football rising is sometimes lost in the footnotes.

None have surpassed it; only Kerry have matched it. But Wexford were there first, and the consistent excellence of that Wexford side shines through the bare statistical records: six Leinster titles in succession and four All-Ireland titles from 1915-18.

Kerry, Mayo, Clare and Tipperary were the counties they defeated in the finals and in the end, it was fatigue and the perceived lack of challenge that caught up with them. But the influence and drive of Seán O’Kennedy was the main reason they were untouchable for so long.

“He cycled from New Ross to Wexford, about 22 miles, every night for training and back again,” recalls Phil, who played in the 1950 Leinster minor final but was simply too busy to follow his father and uncle into the senior game.

“There weren’t a lot of hobbies here at the time. They loved football and hurling and Irish dancing and all that and Seán was a great oarsman too.

“He went into the river one day to save a man who was drowning. He was just very, very strong.”

And he had foresight. Phil O’Kennedy remembers hearing from his father Gus, who played on all four All-Ireland winning teams, how his uncle went to Kilkenny to recruit Paddy Mackey to come and live with him until he was eligible to line out for Wexford.

That was in 1908: in 1910, they won the All-Ireland hurling championship. Then they began to turn their attention to football, with startling results.

They had lost to Kerry in the 1914 All-Ireland but the Munster men were clearly aware of what lay ahead when they met again in the decider a year later.

“My father was a bit of a joker. Kerry had a few new players and at that time, every player used to walk to the centre of the field to contest the throw-in. One of the Kerry lads asked him which of his lads was Gus O’Kennedy.

“My father was playing very well that year. So my father pointed at Dick Reynolds of Wexford. The ball was thrown in and poor Dick was flattened straight away.” It wasn’t enough to alter the result and that marked the start of four perfect seasons.

Through all that time, Seán O’Kennedy cut a hectic path through the local GAA and political scene, staging concerts and feiseanna at the local cinema, getting arrested (along with all three of his brothers) and interned at Wakefield prison in Yorkshire for membership of the IRB and sponsoring a tour of south Leinster and Munster by a group of New Ross performers called ‘The Southern Players’.

His final appearance for the county was in 1922, when he went to watch the hurlers play in Croke Park and ended up in goal because they were short on numbers.

But it was his role in the rise of Wexford football which set him apart.

“People in the county at that time were extremely aware of the football team,” says Dominic Williams, author of the forensic Wexford Hurling and Football Bible 1887-2008, which started as a labour of love and quickly sold out when published.

“There are stories told about the transport to the matches. People went by train a lot. Some of the Leinster championship games were played in Waterford and people travelled by steamer down the river from New Ross into Waterford and there are some terrific stories about matches being abandoned if the train was late arriving or because the boat had to wait for the teams to get there after the game.”

The mystery is not so much that Wexford started winning football championships but that they stopped just as quickly.

By 1918, they looked untouchable. Nobody knew then that their football All-Irelands were finished for the next 100 years.

“After they had won the fourth All-Ireland, Seán O’Kennedy said that players were fed up and tired,” Williams says.

“They had won everything they possibly could and just didn’t have the energy to go any further. They beat Wicklow in the first round in 1919 and then lost to Dublin in the second round.

“But I would argue they remained a football force for some time after. They won a Leinster title in ’25/’26, they were in numerous finals in the 1930s and contested finals right up to the 1950s.

“The hurlers won that All-Ireland in 1910 and were heavily defeated in the 1918 final. And for some reason, hurling went down heavily after that to the point that by the early 1920s they disappeared from the senior ranks. There were absolutely hammered by Offaly and Meath in those days.

“So football sort of thrived on the back of those failures even though there was never any direct conflict between the sports.”

The most recognisable photograph of Seán O’Kennedy features him shaking hands with Kerry’s Dick Fitzgerald prior to the 1915 All-Ireland final. It tallies with the image depicted by DP Mehigan, a school friend of O’Kennedy and the first Gaelic Games correspondent with The Irish Times.

“He was jocose, high spirited, charming, a mass of wavy black hair, long legs, long stride, laughing eyes and a delightful swing of the ash,” Mehigan wrote in tribute. As a footballer he had height, reach, weight and pace. As a selfless distributor of the ball, he had few equals. A wonderful judge of men and teams, he often cycled 80 miles a day in the interests of his teams.

“Coolness personified, he was a born leader and had a genius for finding weak spots in his opponents’ armour. Seán was the idol of the crowds. His black curly hair bobbed up everywhere the play was hottest and his face never lost its humbugging smile. He spent all his leisure and spare cash on organising and training Wexford teams.”

It took its toll. O’Kennedy worked for the county council in later years and came back to train the Wexford senior team of ’45. They went off on a training camp to Enniscorthy for a week and reached the Leinster final but were unable to scale the heights of the previous generation.

O’Kennedy continued to live with full throttle and, as his nephew put it, “wasn’t a man who looked after himself”. He died on June 22nd, 1949, at the age of 64 and is buried in St Stephen’s Cemetery in New Ross.

Four years later O’Kennedy Park was named after him. No plaque has yet been erected to salute Wexford’s four in a row team. That may change in their centenary year.