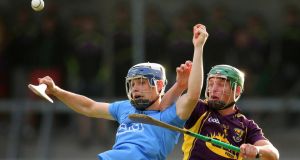 Conor McDonald in action for Wexford in an Under-21 match against Dublin. He’s a player that gets supporters excited. Photograph: Cathal Noonan/Inpho.

Con Houlihan had some habits that lesser writers couldn’t get away with over the course of the most glittering sports-writing career this country has ever seen... chief among them, for me, being watching games from the terraces.

I had the pleasure of a spot behind the goal in Nowlan Park on Saturday evening for Waterford against Wexford, and it was the first time in quite a while I’d watched a really big game from an upright position.

Of course, you spend the vast majority of your life watching gaelic games standing up – whether that’s club games or juvenile games, or even a good number of games I played in myself, some uncharitable people might tell you. But it’s a pretty good bet that you’ll meet a far more colourful breed of person when you’re on the terrace.

For instance, there was the man standing in front of me, holding a three year old with a mobile phone number scrawled on his little arm. At first I thought – surely this guy isn’t trying to meet single women, using his kid as both a conversation starter and as a post-it note?

It’s a tactic beloved of many young men with dogs, but using the fruits of one’s own loins as a seduction technique is surely another matter entirely.

A moment’s contemplation and I came to the conclusion that the mobile phone number must be the father’s own, for use if (or when) the child wandered away out of sight.

Instead of having to hear one’s own name being read out over the tannoy to come and collect your child, a simple phone call would suffice, and parent and child would be reunited without the whole stadium bearing witness to your embarrassment.

It was an ingenious plan, I decided, and one which could be adopted by more parents... if they could get their child to stay still for long enough. And why not stop there?

They could write their home address across the child’s forehead, with a few stamps in his pocket, and when the child wandered off, you could relax and enjoy the rest of the game in peace, safe in the knowledge that your offspring would be delivered safe and sound to your front door, two to three working days after the final whistle.

As I’ve said it had been a while since my last spell on a terrace, so I had forgotten just how deeply unpopular my arrival, all six foot five of me, is.

I once attended a Bob Dylan concert where the man standing directly behind me offered me ten euro if I would remove myself to another vantage point, far from his line of sight.

He was a short man, and was displaying the anger management issues sometimes seen in a man of that stature, so I decided to hold my ground.

Old Con was of course a tall man himself, so would have seen more than his fair share of any match from his old stomping ground on the terraces, but the fact remains that, particularly in hurling, your view is not exactly ideal, even with some genetic advantages.

We were at the end where four of the five goals were scored on Saturday evening, so we were lucky, but the action at the other end was a secret which only unravelled by degrees, with all the clues coming courtesy of your fellow supporters around the ground.

It’s still an immensely enjoyable way to watch a match, and you can feel the ebb and flow of a game better there than from a sitting position I always feel.

There’s also something visceral about the buzz that goes up when players like Conor McDonald get the ball – in the first half on Saturday, when he scored all of his final tally of 1-2, his every touch was greeted with a huge surge of anticipation.

Nicky English referred to it on Sky’s broadcast of the game, which I caught the following day (to find out what happened at the other end of the pitch) – he’s the latest in a long line of Wexford target-men, all of whom are beloved figures in their county’s history.

And even though my father is from Waterford, which makes me a Deise fan by default, Wexford’s run throughout July has been thrilling to watch.

Rather than running out of energy after three games in 14 days (two of which went to extra-time), they seem to be feeding off the growing sense of excitement amongst their fans.

That excitement is such that their county board is looking at moving their quarter-final against Limerick to Croke Park, from Thurles, whose paltry 46,000 capacity seems wholly incapable of handling them.

And if a few kids have to go missing temporarily in the midst of all that euphoria – don’t worry, they have that covered too.