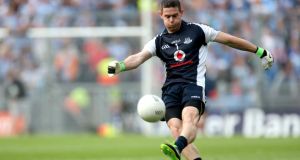 Stephen Cluxton takes a free for Dublin. Rob Carroll says 30 metres or less from goal “other than if a player is one on one with the keeper . . the upside of a foul is non-existent.” Photo: Ryan Byrne/Inpho

“The GAA is hush hush; nobody will tell you what they’re doing,” said Kerry football analyst Paudie McCarthy.

That’s no surprise. It’s in the nature of top-level sports teams to be secretive. Strategies, tactics, line-ups; each are to be protected at all costs.

The chap up the road who does the same job as you every day, but for the neighbouring county.

Sports analysts work away, building up a trove of data from which to impart valuable insight to the coach and players that impact a performance, and a result. But in the GAA access to player data outside the county boundaries is minimal.

This lack of player statistics frustrated people like James Robinson who said he started compiling the shooting numbers of Kildare footballers in 2011 by hand. After all, he couldn’t find the data anywhere else. He’s now expanded that approach for his website, Don’t Foul, tracking turnovers, turnover type, possessions, attack origination and more.

Robinson suggests that one small way of levelling the GAA playing field would be to centralise the collation of player statistics: “Have a hub, get all the games, and send all the data and code out to the smaller teams.”

That’s a long way off. While senior county teams and some clubs are doing in-depth analysis, it’s reasonable to say that they’ve a bit of work to do at headquarters.

“We’ve a body of work do to at a central level – a statistics repository in terms of scores and championship appearances,” a GAA spokesperson told The Irish Times. “I think it’s only a matter of time before you see a more rigid system for the collation of that type of data.” 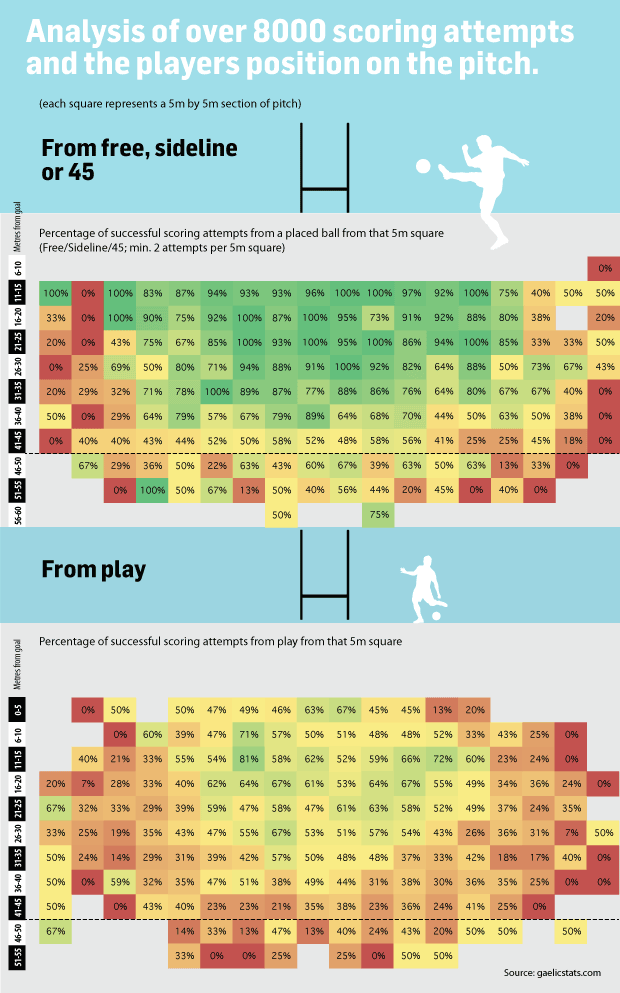 Commercial GAA performance data collation is happening. Rob Carroll of Gaelic Stats supplied The Irish Times with a dataset of 8,183 shots taken in over 140 senior inter-county football matches across 27 venues between 2011 and 2015.

Note that the data comes with a small caveat: while the various lines on the pitch are useful for ensuring accurate data entry, not all pitches are the same dimensions. But with a dataset that size one can find interesting things.

The difference between shooting accuracy from a free/45/sideline ball versus a shot from play, for example. Even accounting for players going for goal when they cross the 15m line (there’s a huge spike in goal attempts as players get to that mark), it’s a dramatic difference.

While Carroll does work with individual counties, the wider potential for such data for fans and media is clear. Look at Gaelic football’s professional cousin in Australia, for example, where Champion Data has compiled AFL player statistics for many years.

Apart from a live data feed available to analysts and coaches during the game, this rich store of data can have other interesting uses such as allowing an overlaid “painted” graphic of kick probability from a set shot to appear on the live television feed, taking into account distance, angle to the posts and the historical accuracy of both the player and the league.

“For the AFL we have 12 staff members working on the statistical entry side for every game,” said Fionn Colvin of Champion Data. “Every time somebody takes a shot at goal we plot exactly where on the grass they are when they take that shot. From over 20 years of history we can produce some very accurate models on the probability of kicking a goal from that position in that venue.”

Darren O’Shaughnessy, an Australian sports analyst, was with Champion Data when they introduced kicking percentages and probabilities for the TV coverage.

“The producers’ interest is to make it a broadcast people want to talk about”, said O’Shaughnessy. “Give them a number and provoke a debate in the pub in front of the screen; it’s exactly what they want.” The AFL is a professional world, with professional budgets. Paudie McCarthy, who also performs video and performance analysis for Hibernian FC, said one big step the GAA could take to make an analyst’s life easier would be to centralise access to video.

“It’s amazing how much time you spend chasing up footage,” said McCarthy.

Centralising video footage (it’s not unknown for professional rugby teams to take out an Opta subscription for the sole reason of securing access to their online video portal) frees up analysts to spend time on more important things, like finding that sometimes it makes sense to let your opponent shoot.

Referring to shooting success rates 30 metres or less from the goal, Carroll said “other than if a player is one on one with the keeper, or clearly going through on goal, the upside of a foul is non-existent. You’re almost guaranteeing a point”.

That concept of letting one’s direct opponent shoot might be difficult to get across to a defender who’s spent a lifetime trying to achieve the opposite.

But perhaps that’s where having the numbers can help. Data, information, knowledge.

When some counties have so much more off-field resources than others, providing equal access to video and, some day, data might be one tiny way to help level the GAA playing field.

What they’ll do with it? Well, that’s up to them.