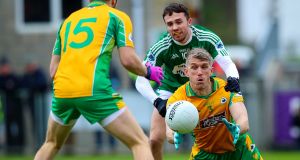 Corofin’s Kieran Fitzgerald believes by the time his side’s All-Ireland club semi-final against Gaoth Dhobhair was played last year, the GAA public’s attention had wandered and moved on to the by then up-and-running national leagues. Photograph: Tommy Dickson/Inpho

Heading into its 50th year, the All-Ireland club championship has now entered a transformative phase – and that’s not some portentous exaggeration. One of the biggest fixtures anomalies has been the situation faced by provincial club champions for years and it’s edging closer to being addressed.

The idea of introducing a calendar year into the club All-Ireland schedules has been around for a good while and as a concrete proposal has been gathering dust in Croke Park for the past few years.

Tuesday’s release of the GAA’s central fixtures plan for next year confirmed that the All-Ireland club semi-finals are to be brought back before Christmas with just the final remaining to be played in January 2021.

The idea of a double bill in football and hurling being played under floodlights in Croke Park is a great idea and will add to the status of the championships.

Already this season’s All-Ireland activity has been dragged forward to January, dispensing with the time-honoured St Patrick’s Day slot in order to impose some rhyme and reason on the competition.

Previously it required provincial winners to wait nearly four months to play two matches were they to reach the final and for semi-final losers, the wait was a more modest two-and-a-half months for a single fixture.

There had developed a steadily increasing volume of discontent, particularly from club players who had become regular contenders. Corofin’s Kieran Fitzgerald, at nearly 39 still putting manners on inter-county full forwards, spoke about this last season.

“It’s mentally draining, training on poor pitches. Physically you’d be fine but you’re slogging away and there’s 60 days to go for 60 minutes of football. It is crazy and I think it has to change. St Patrick’s Day while it well known for club finals has to change.

“If you had someone from another sporting body and you explained to them that these guys are training for 60, 70 days for one game they’d think it was mad.

“From a GAA point of view, before Christmas it is all club: county finals and provincial finals dominate what’s happening at the time. Then all of a sudden it just stops and then when it comes back it gets lost.

“If it was structured a bit better you could have a club final two weeks before Christmas and I don’t think any club player would have a problem with that – playing under lights in Croke Park. Then the club season is finished and the inter-county season can move on.”

The point made in respect of inter-county activity is just one of the potential beneficial impacts as things stand. Certain Ulster hurling counties – traditionally Antrim but also Derry and Down – and also Galway have been affected by the unavailability of some of their best players during the league, as the club championship overhangs into the New Year.

Recent years have also seen for the first time a serious intrusion by the club championship into the Sigerson and Fitzgibbon Cups.

With those third-level competitions being also squeezed forwards into January and early February, that’s not going to change immediately but were the club finals to complete the move to a calendar-year season, we could spare players like Corofin’s Kieran Molloy from having to rally-drive around the country in order to represent his club and college on the same day.

Fitzgerald was also correct to reflect on the rupture in the championship’s rhythm. He referenced the 2019 semi-final against Gaoth Dhobhair – a great match, as it turned out – and said that by the time it was to be played, the GAA public’s attention had wandered and moved on to the by then up-and-running national leagues.

Such is the yawning chasm between the two parts of the championship season – up to provincial and then, All-Ireland – that the ability to negotiate it became a required part of the weaponry for successful clubs.

Consequently it wasn’t coincidence that players with more successful clubs began to question the prolonged demands of the club season, which in some cases pitched All-Ireland winners back into county championships within weeks of St Patrick’s Day.

Serial success has become more common. In the years since the turn of the century, there have been four back-to-back hurling All-Irelands – with the prospect of a fifth this season, as Ballyhale are steep odds-on to retain their title – as opposed to just one in the first three decades of the championship.

It’s a similar story in football. This season Corofin are also hot favourites to record an unprecedented three-in-row – in what would be the fourth successful defence of a football All-Ireland since 2000, compared with just two up to that point.

For clubs unused to success at provincial and national level, the incongruity of the system can be absorbed by the sheer novelty of the adventure; for others it simply becomes a regular encumbrance.

It’s not all plain sailing and within the provinces not everyone is convinced that it will be practical to get the All-Ireland final played off before Christmas even in the medium-term future but the burdens on players will have eased by next season.

But the desirable expedient of moving the whole championship to a December finish would bring great, atmospheric occasions under Croke Park lights and allow the winners to celebrate Christmas in a manner that can’t happen under current schedules – and those who didn’t win would still get to have a Christmas.