Seán Moran: The scale of Dublin’s poor judgment and decision-making is epic 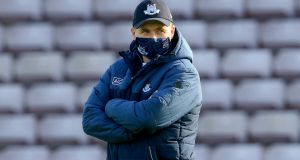 How does Dessie Farrell, who worked so hard for player welfare in the GPA, feel to have all that muttering about how this wouldn’t have happened under his predecessors? Photograph: Bryan Keane/Inpho

In an unpublished address at an event organised by NUI Galway graduates as part of the GAA’s 125th anniversary 12 years ago, Prof Gearóid Ó Tuathaigh made a resonant point that has proved applicable time after time in the interim.

It related to amateurism but it’s versatile. Essentially he argued that it is a sign of fatal corruption in any organisation that rules are routinely ignored: saying one thing but doing the opposite and crucially, allowing it to be done.

This Saturday marks the 50th anniversary of the deletion of the Ban at the 1971 congress in Belfast. This was facilitated by a motion originating in the Skryne club in Meath and accepted at annual congress.

The motion decreed that on an evening in November 1970, clubs would hold a special general meeting to consider the views of ordinary members.

More than 80 per cent of the national membership voted for change.

There were obvious reasons: a younger membership, who were comfortable playing different sports, the televising of rugby and soccer, which made attendance at matches unnecessary for spectators and the rule – short of getting the GAA’s notorious vigilance committees into every sitting room in the parish – impossible to enforce.

Another reason made the change particularly desirable and is best encapsulated by a passage in the history of Dunshaughlin GAA, ‘Black and Amber’ by Jim Gilligan and the late Patsy McLoughlin. This is slightly ironic in that the club is occasionally credited with having introduced the Skryne motion.

“The ban led to much hypocrisy, duplicity and cynicism. Players usually assumed false names when playing the forbidden sports and club officials generally knew when members were flouting the ban. Defeated clubs often reacted by objecting to the winner for fielding men who had flouted the ban rule while turning a blind eye to similar transgressions by their own members.”

So the Ban was a study in a rule, breaches of which were selectively punished or attracted the enabling gaze of a blind eye.

We see the same attitudes when it comes to dealing with foul play and cynicism. There is always someone to argue that genuine deterrent is ‘unnecessary’ or would ‘ruin the game’ despite such permissiveness guaranteeing that bad behaviour will be encouraged and perpetuated.

There is unfortunately a culture of cheating or disregard for rules within Gaelic games. It can be partly attributed to that great old standby of the uneasy conscience: everybody’s doing it. Generally though, it comes down to the great sporting euphemism for defying rules and regulation – getting an edge, regardless.

Croke Park don’t believe that behaviour such as that indulged in by some Dublin footballers in breaking public health directives to train collectively is rampant. They are of the view that in this age of social media and technology that weaponises prying eyes, evidence of similar wrongdoing would be impossible to suppress.

This may be reasonable or it may be naive but the teams caught so far, Cork, Down and Dublin footballers have all been bang to rights.

In relation to those earlier cases in January, Feargal McGill, director of player, club and games administration, was unsparing in his reaction to this newspaper.

“It’s the most disappointing thing I’ve seen in nearly 20 years of administration,” he said. “We’re looking at meaningful close seasons and split seasons but if people can’t follow these guidelines about limiting activities in the face of a pandemic in order to protect their own players and communities, it shows the difficulties we can expect in securing compliance in a normal year.”

He has presumably not resiled from those views.

What were Dublin thinking? Presumably that everyone was at it but even allowing for that, the scale of the poor judgment and decision making is epic.

To have decided to proceed with a gathering just hours after Government had given the long-awaited go-ahead for intercounty training to return and the GAA had issued an exhortation to counties not to cut corners little more than two weeks before the permitted start – was extraordinary.

Croke Park had even flagged such breaches as having the potential to derail the return to play. Who could have blamed the Government for unplugging the season on Thursday afternoon?

Even in transactional terms what was the benefit here? Dublin have dominated football for a decade but done so with admirable self-possession. As a group and individuals they have involved themselves with charities and good causes and not simply for publicity because much of it is off-grid.

What in an illicit kick-around at seven in the morning was worth undermining that good standing and the collective reputation? They could have gone off in groups of four to St Anne’s Park and no one would have cared or run up and down the Clontarf Road.

What do the players who didn’t attend think?

How does Dessie Farrell, who worked so hard for player welfare in the GPA, feel after a superb first year when he guided the team to another historic achievement, to have all that muttering about how this wouldn’t have happened under his predecessors?

Even if all of their most credible rivals are engaged in non-stop training in total defiance of the rules, I can’t see how Dublin could turn around and say that this was worth it for the sake of a fortnight.

Dublin county management acted with commendable decisiveness and Croke Park’s gratitude at not being dragged through a month of Zoom disciplinary hearings as well as the Cork and Down precedent of not suspending players mean that the penalties are unlikely to be any more stringent than Farrell’s 12-week suspension.

That this culture of rule-breaking has now corrupted the hitherto most admired team in the country has to be a matter of urgent concern for the GAA.