Seán Moran: Down v Meath 1991 - getting to the heart of modern football 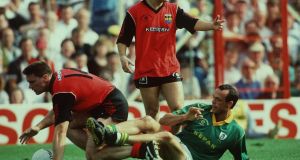 They gathered in the shadow of the ground, which had changed beyond recognition from the time when their paths crossed most famously.

There was a bundle of reasons why the Down and Meath footballers, who had contested the 1991 All-Ireland were selected as test cases for Donal O’Neill’s documentary Extra Time, which records the screening for cardiac health of the players, now between their late 40s and early 60s.

O’Neill’s father Kevin was a member of the Down teams of the 1960s and he survived a heart attack in 2010, as did twice All-Ireland medallist from the 1990s Gary Mason. Ambrose Rogers played in the 1991 final and wasn’t as lucky, suffering a fatal heart attack in his 30s in 1999.

In association with businessman Dave Bobbett, founder of the charity Irish Heart Disease Awareness, the short film (a full-length version is due for release later this year) follows the players through a series of tests, including CCS (Coronary Calcium Scoring), a scan that Bobbett passionately advocated for all middle-aged men at Friday night’s launch in the Croke Park Jury’s Hotel.

More of that, below.

Not every All-Ireland is a seminal event but 1991 was. It heralded the rise of Ulster football

Running throughout the programme were the highlights of the 1991 All-Ireland and 28 years later the sense of history was striking.

Croke Park was colourful with all the red-and-black flags swaying like poppies around the stadium but the context of that match is hard to recapture. Not alone had Down not won an All-Ireland since 1968 but no counties from either Ulster or Connacht had done so in the same period.

There is general recollection of Down manager Peter McGrath’s stump speech on the victorious bus home and his phrase that they “had beat the team that couldn’t be beaten”. It sounded melodramatic but contained a grain of truth.

That summer Meath played 10 matches – an unprecedented schedule for those pre-qualifier days – including the famous four-match saga against Dublin in the Leinster championship during which they also drew with Wicklow. Aside from those draws they had scrapped out a narrow win against a good Roscommon team and if “unbeatable” was an exaggeration, well no-one had managed it in nine championship outings.

Down’s peculiar record against Kerry was also in play, as they had beaten them well in the All-Ireland semi-final to maintain the perfect championship sequence – four from four – but Kerry were at their most vulnerable in an All-Ireland series for decades and that was priced into the team’s perceived merits.

Meath had lifted the Sam Maguire twice in the previous four years and were seasoned and very experienced.

Luck deserted them along the way, though. Robbie O’Malley, probably the best corner back in the game at the time, broke his leg in the Leinster final and in the lead-up to the All-Ireland Colm O’Rourke was unwell and although he triggered Meath’s comeback in the final after coming off the bench, he was unable to play a full part.

Although the Ulster county had won an All-Ireland under-21 title 12 years previously – three players, captain Paddy O’Rourke, Greg Blaney and Liam Austin played in both – and a minor title in 1987, under McGrath’s management, senior had been a wasteland since 1968: just two provincial successes and the 1983 league, none of which led on to greater things.

All told they had three players with one All Star each, Blaney and Austin going back to 1983 and another seven years later. At last Friday night’s event, James McCartan said that he got that one by buying drink for journalists on the 1990 international rules tour of Australia. I don’t remember this but then again I wasn’t a selector at the time.

What Down did have was a radiant self-confidence. The county had never lost an All-Ireland final and no doubt appeared to cross the collective mind that this could have been good fortune or coincidence.

Tactically they anticipated the modern age with two wing forwards, Ross Carr and Mason who had previously been half backs and indefatigably tracked back. Both good kickers, they shared frees, right and left. Blaney was the prototype creative centre forward, servicing two fast, incisive corner forwards in McCartan and Mickey Linden and a wrecking ball full forward, Peter Withnell.

The match was decided between the 19th and 47th minutes when Down out-scored Meath by 1-9 to 0-1 and it’s doubtful that any other team could have lived with fluent destructiveness unleashed in those 28 minutes.

Even the comeback kings couldn’t turn it around although they went close, losing just 1-14 to 1-16.

Not every All-Ireland is a seminal event but 1991 was. It heralded the rise of Ulster football – no other province has seen the Sam Maguire more often in the 28 years since – and obliterated the stranglehold of the Munster-Leinster duopoly.

Back in the present, Meath had a rather more serious victory when the veterans of 1991 were assessed by the CCS test.

Although both teams had eight players, who returned a perfect zero score the average of the respective groups diverged sharply: Meath came in with 16 whereas Down’s was 264. More acutely, eight of the latter players – some of whom registered in the thousands – were recommended to seek further medical assessment whereas just one Meath player came into that category.

It’s good that the memories of teams’ achievements live on as long as possible into the future but it would be even better if the players themselves could as well.