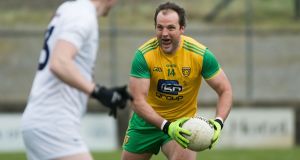 Donegal captain Michael Murphy in action against Kildare in the league. ‘Dublin are a massive way down the line, a huge distance.’ Photograph: Evan Logan/Inpho

As the last county to beat Dublin in the football championship – now five years ago – there is reason to believe Donegal are still among their closest rivals. How could anyone not remember what they did to Dublin in the summer of 2014?

Donegal captain Michael Murphy is around too long to start looking that far ahead – he’s entering his 13th championship season, having made his debut in 2007 aged 17 – but there are hopeful signs nonetheless: the Donegal of 2019 are definitely coming in with some exciting new players, on the back of rising league form, with a new coach who Murphy hails as “really, really strong”.

The immediate concern, naturally, is their Ulster championship opener against Fermanagh on May 26th at Brewster Park – six weeks from this Sunday: if Donegal are to repeat their run of 2014, or indeed their All-Ireland win of 2012, that’s exactly where it must begin.

“Dublin are a massive way down the line, a huge distance,” says Murphy. “If you’re to get there you have three games minimum in Ulster, and then depending on how the draw goes, because I don’t know how it works with the Super-8s [the Ulster and Leinster champions will be in different groups].

“So you’re not going home tonight or thinking for the next six weeks about Dublin. We’ll look at our own game. We know what style of football we want to play. We believe that if we can win the games, get the belief and the confidence to come here playing the game we want to play that we do feel that’s the best way to play against Dublin, without a doubt.

“I think it was important for us to make that transition, because if you are to be successful and to win the ultimate, we needed to change up the way we were trying to play games. I think that’s a start but it’s only a start. The thing that needs to get us to that point is wins in Ulster. There’s no point commenting on potentially playing Dublin when it’s a huge, huge way down the line for us. It would be foolish to start speaking about it.”

Murphy, speaking in Croke Park as an ambassador for the 2019 Kellogg’s GAA Cúl Camps, references their recent victory over Meath to claim the Division Two title as evidence of that recent transition: coming from eight points down, Murphy was typically influential when moving closer to goal, alongside younger forwards Oisín Gallen and Jamie Brennan.

“Brilliant to see. They’re hugely exciting to train along with and see. They have lots of pace and bucket loads of energy and just to see their fearlessness. Oisín, I’ve seen him for a while. He has a good head on his shoulders in terms of he’s well grounded and well settled. He has a good technical ability to go along with it. He’s massively encouraging.

“Jamie has been three years on the go now and he’s flourishing into something that’s quite dangerous and is very useful for us.”

Donegal will also have Paddy McBrearty back on board, after missing the Super-8s last summer with a cruciate knee ligament injury. McBrearty played for his club Kilcar against Murphy’s club Glenswilly last Sunday, scoring four points in the five-point victory.

“To lose someone of his calibre at that time of year was really difficult, knowing how driven he is, how big a competitor he is. No denying it, the type of football he was playing, he was irreplaceable. At the same time, we could possibly have still been in an All-Ireland semi-final, but Tyrone beat us fair and square on the day. We didn’t have enough to finish it out, went from four points up to losing quite comfortably. When that happens, you can’t put it down to any one player. We weren’t up to it as a group. Not a nice place to be.”

While Donegal’s motion to restrict Dublin from playing their neutral Super-8 games at Croke Park was unsuccessful, Murphy won’t be using that as any excuse for 2019 either: “Dublin beat us fair and square. They would have probably beat us fair and square in Parnell Park had it been the same thing. That’s all gone. I’ve no real other feelings on it.”

What might make a difference, he says, is the addition of Stephen Rochford as Donegal coach, after leaving his post in Mayo in 2018: “Excited when I first heard. Just a really, really strong coach, really strong way of looking at the game, personality-wise. We made no secret over the last year or two that we wanted to play wee bit more expansive football. I think he’s helped to add something to that, along with Karl Lacey and Declan Bonner who were already there. The three of them really work well together.”

And thoughts of another All-Ireland?

“I don’t think you ever settle for one. It’s the thing that keeps coming back, the dream, the ultimate, but then you need to be realistic too and I suppose for us at the moment, and I look back at us when we did win it, you were building towards it. Your main building stone was Ulster and winning games in Ulster. That was huge for us, 2010, 2011, 2012, it was massive for us to just win games.”