Roots of Waterford’s revival running deeper than many realise 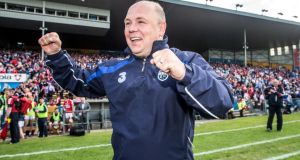 Senior manager Derek McGrath, who has led the county unbeaten through the season to date, also worked with many of the players at school in De La Salle College where he teaches. He helped guide the school to back-to-back All-Irelands colleges titles in 2007-08.

With the supply lines humming, another telling indicator was in the third-level sector where the county’s powerhouse institution, Waterford IT, has come to field more and more local players.

“Definitely,” says Colm Bonnar the former Tipperary All-Ireland winner who also served as a selector with Waterford amongst other credentials at the top of the game and who has been the GAA Officer in WIT for a quarter of a century.

“But the last three years the bulk has been from Waterford and it’s not like we’ve been going badly. We won Fitzgibbon last year, reached the semi-final the year before and the final this year.

“I was so used to the big Kilkenny influence that I underestimated how far we could go with all of the Waterford guys but we’ve had nine or 10 on the panel and six or seven on the team and the Kilkenny representation has gone back to two or three.”

He also points out that there are Waterford players in other colleges as well, such as Tadhg de Búrca in UCC and Stephen Bennett with UL.

While acknowledging the huge impact of the development systems that have been producing top-class players, Bonnar also highlights the influence of the Waterford team of the past decade that ranked as one of the best but never quite made it over the line in an All-Ireland.

“That team with Ken McGrath, Dan Shanahan and John Mullane were pioneers. Everyone in Waterford wanted to pick up a hurl; that shouldn’t be forgotten – the profile that Waterford team gave the game.”

Shanahan is McGrath’s assistant with the current team and he drew attention to the rising popularity of the players who beat Cork at the weekend.

“The support has been unbelievable. People say they’ve been gone for years but I don’t think they’ve ever been gone. I think the financial situation doesn’t help at the moment. We won’t ever get 45,000 at a semi-final any more but we’re delighted with what we have today. We’re delighted with the supporters and delighted for the performance of our team.”

Bonnar believes it’s been an ideal year for the seniors, starting in Division One B to which the county was relegated the previous year. Incrementally they’ve developed confidence and successfully mastered an energetic defensive system, which converts swiftly into menacing counterattacks – to the extent that they won the league, the first county from a lower division to do so in 24 years.

What’s been impressive about the team is the strength in depth. McGrath triggered a now fading controversy by replacing a number of experienced players before the start of the season in order to promote the younger generation. He was still able to mobilise an impressive bench on Sunday.

“It’s all about the panel, says Shanahan. “The three lads were minors a couple of years ago. Tom Devine got a goal, Paddy Curran and Shane Bennett. They’re great young lads.

“They love playing at that tempo in Thurles. Go out there, 25 or 30,000 – it’s why you train at the start of the year in the muck and the shit, to get out there on days like this.

“That’s what they’re about. That’s the talent they have. It’s a complement to the underage structure that brought these lads in from U-14 up. They’ve won All-Ireland minors, played in Croke Park in front of thousands. We’ve seen what they can do below in training.”

Next stop is a Munster final, a prospect Shanahan relishes.

“We won’t worry about Limerick or Tipp – let them battle it out. They can flake each other away. We’ll just sit down in the background and watch it.”