Pressure on Tyrone as they seek to preserve top-flight status 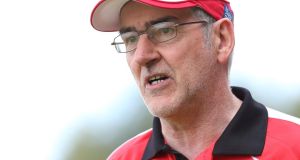 Mickey Harte: has said Tyrone need to be in Division One of the league. Photograph: Andrew Paton/Presseye/Inpho

Arguably the contemporary focus on the league began with Tyrone. In Mickey Harte’s first year, 2003, he set out an uncomplicated agenda to try to win all matches and competitions that the county contested. It was successful 12 years ago with only a McKenna Cup defeat by Monaghan blotting the copybook of a season that delivered national league, Ulster and All-Ireland championships.

This weekend however Tyrone with Harte still in command, face a more desperate challenge, needing to beat Kerry in Omagh to stay in Division One. Turning the screw farther is the visitors’ possible need to get something from the match.

Ten seasons ago in the league the counties met in Killarney with Tyrone, Kerry and Mayo all in contention for the top two places. If Kerry had won by eight they would have finished ahead of Tyrone, by seven and they would have finished ahead of Mayo. In the event Mark Harte’s free in the fifth minute of injury time cut Kerry’s margin of victory to six.

Former long-serving selector Tony Donnelly was one of Harte’s management team that day and remembers the tension.

That September when the counties met in the All-Ireland final, Tyrone won. League trends also proved prophetic five years later in 2010. That day Dublin rounded off their best league campaign in 11 years by beating Tyrone in Omagh. Although Pat Gilroy’s team didn’t qualify for that year’s final, the side that would win the following year’s All-Ireland was taking shape.

“Dublin were outstanding that day,” remembers Donnelly. “Bernard Brogan was on fire – we tried three different markers on him – and they were beginning to operate their own system leaving two men up front. Tactically they won that day.”

Tyrone’s inability to raise their game for such an important match was unusual and for the first time in Harte’s tenure they dropped out of the first division. Donnelly doesn’t believe it was of major significance.

“We were relegated but regrouped for the championship and won Ulster.”

The championship ultimately bore out the patterns of the league, though. Dublin faced them in the All-Ireland quarter-finals and despite their April victory were underdogs. In the end they beat Tyrone for the first time in four championship meetings.

Having spent two seasons in Division Two, Tyrone returned to the top flight in 2013 and have been involved in final-day drama ever since. Two years ago they also faced Kerry but were already en route to the play-offs. Their opponents however needed to win in Omagh. Even the fact that they did would have counted for nothing had Donegal managed to protect a one-point lead in injury-time against Dublin in Ballybofey. Instead Dublin equalised and the team who had spent the least amount of time in the relegation zone that afternoon – Donegal – ended up being relegated and Kerry were saved.

On Sunday Tyrone need to win or they go down. Kerry are two points ahead with slightly more room for manoeuvre. Donnelly agrees there is more pressure on the home side.

“Kerry have Sam and are gearing themselves for the championship but Tyrone – and Mickey said this – need to be in Division One.”