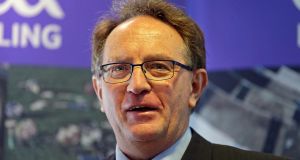 The GAA needs to develop the ethical basis of its coaching philosophy if it is to tackle the significant problem of players dropping out before adulthood. At the moment 58 per cent of players are lost within Gaelic games between the ages of 12 and 21.

At Friday’s opening address of this year’s GAA National Games Development Conference Pat Daly, director of games development and research, will be arguing that the challenge facing the association is a product of an undue emphasis on elite competitive activity.

Among the initiatives to address this is Super Games, open matches under supervision at which anyone is welcome. Super Games Centres have shown exponential growth since the concept was trialled last year.

“It’s for those who just want to play and is the opposite of formal, competitive matches,” said Daly. “The whole idea is the provision of games with your friends. If you want to play, you play. This year there will be 65 centres up and down the country where anyone can play.”

He sees the traditional operation of the national Féile tournaments for under-14 footballers and hurlers as being part of the problem.

“If we value inclusiveness, there are a very small number of dominant teams who win the Féile and a big number – as big as 95 per cent – don’t get to take part. Host teams frequently suffer comprehensive defeats and the average winning margin is around 25 points at the end of half-hour games. Where is the inclusiveness there?”

“In the past two years there has been an increase of 64 per cent in the numbers attending Féile, which has been a step in the right direction, towards national participation in the weekend.”

A strategy that prioritises participation over elite development stands a better chance of attracting greater numbers to play and remain playing as they get older.

“For too long there’s been undue emphasis on the top players and yet we can see the benefits of inclusiveness in the younger age groups. Numbers have increased exponentially in terms of Cúl Camps and Go Games but by the time the games move to a highly competitive model at adult level there’s a massive drop-off.”

Daly said that the purpose of his ideas is to “create a value-laden approach to Gaelic games”.

Expanding on the theme, he added: “The two key elements of coaching games are the practical, ‘who, when and where’ but also the conceptual, ‘what, how and why’. If the association has values, is inclusiveness one of these?”

Daly’s address is the opening speech in Friday evening’s Play to Stay module, which also features a presentation by Paudie O’Neill, chair of the Hurling Development Committee.