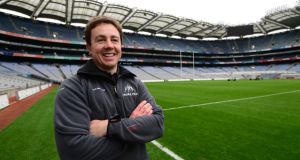 Stuart Wilson, pitch manager at Croke Park. “For football and hurling, you don’t want the pitch as firm as you would for American football.” Photograph: Bryan O’Brien

There haven’t been – and aren’t likely to ever be – many more hectic weekends in Stuart Wilson’s working life. The Croke Park pitch manager watched two armies of American football players spend Saturday afternoon advancing and retreating up and down his field before two tribes of Gaelic footballers did the same (twice – senior and minor) on Sunday. In between, he and his staff made like the elves and the shoemaker, turning over the playing area as if nothing had ever happened. All just seven days out from the showpiece of the hurling year.

Wilson learned his trade at Woburn Golf Club, just outside Milton Keynes. He spent a few years as deputy head groundsman at Arsenal’s Emirates Stadium before marrying an Irish girl and ending up over here.

He’s been the pitch manager at Croke park since January 2012 and has seen different sports, different concerts, even a Eucharistic Congress come and go. But nothing has been like this week, which he describes as the high point of his career.

The level of detail that goes into something like this is mind-blowing. Effectively, Wilson and his staff prepared two completely different pitches for three different games in 24 hours. When the American football people first met with him in April, their strong preference was for as firm a pitch as Croke Park could provide. The reason wasn’t overly scientific – American football players are monstrous even at college age and soft pitches only make them less mobile.

“That was music to my ears,” says Wilson. “Because the drier the pitch, the less wear and tear it will undergo. It limits the damage. In the week running up to the game, we knew there would be some rain with one especially heavy day so we hired in some rain covers and covered it up the middle. In American football, the high-wear area is up the middle. By the end of the week, the moisture content in the middle of the pitch was far lower than on the sides. That allowed us to keep it firm.”

As soon as the game finished around Saturday teatime, Wilson and his team set about getting it ready. They worked until 11.30 that night, clearing it, refreshing it, cleaning it. Up and down the sidelines, concert flooring had been laid because ESPN wanted cameras running up and down so that had to be lifted. The goalposts were changed, the netting in front of the Hill and Canal End reraised.

“We used spiking machines to soften up the ground,” says Wilson. “For football and hurling, you don’t want the pitch as firm as you would for American football. So the spiking machines did two things – they softened up the pitch first of all but they also allowed the water that was on the pitch to move down through the soil and run out.

“We had to use a huge amount of water on the pitch to wash off the lines from the American football game but the result of that was an awful lot of standing water and that had to be got rid of. So the spiking machines did that job.”

Anyone who was there both days – or even just watching the TV on Sunday – will have noticed a total lack of residue from the lines that were on the pitch on Saturday evening.

Wilson says that the turnover was so well done that the company they used have taken before-and-after evidence away with them to use when they’re touting for business Europe-wide.

“The paint they use is a water-based paint so it removes easier than titanium-based paints that would usually be sued on pitches.

“They would be a lot brighter but also a lot more durable. So they use a reactivator then to essentially bring the paint to life again and that makes it easier to wash off.

“Then they followed with a power-washer. You can’t go too hard because you will damage the grass plant so it was a light wash. But because the paint had been reactivated, it came off pretty easily.”

The brushed the pitch by hand, then cut it with a rotary mowers to pick out the debris from the day before and then cylinder mowers to put the crossways design in for the TV cameras. They did the same again mid-morning.

By Monday, it was a matter of repair and maintenance all over the pitch.

Between the three games, more than 150 players had slid, stomped, turned and pivoted on the grass over the weekend and now Wilson and his team had to get it ready for the biggest game of the hurling year. Monday was a TLC day, Tuesday and Wednesday rest days to allow the pitch come back to life.

“The presentation of the pitch will start full-time on Thursday.

“We’ll work on the firmness levels of the pitch as the week goes on. We gave the pitch a good soaking on Monday night just to lift everything.

“On Thursday, we’ll spray the pitch with a liquid fertiliser, mixed in with seaweed, iron and biostimulants and that will give us the real good colour for the weekend.”

Mesut Özil confirms Arsenal exit as he moves to Fenerbahce 17:37
Here is your handy guide to sport on television this week 17:01
Dreal Deal steps up again at Punchestown despite alarming drift in price 16:37
Tanguy Ndombele’s moment of magic caps Spurs win at Sheffield United 16:33
Australian Open plans in tatters with 72 players now isolating 15:26