Less than half of counties using April for club championship fixtures 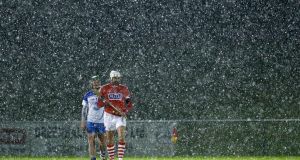 The GAA sought to ensure there was little or no inter-county action in April.

The GAA’s club-only month of April has not been used by over half of county boards for their respective championships.

Back in October the GAA released its master fixture plan, in which the month of April was left vacant for club activity. But this month there will be 25 club championships with no fixtures being played out in them.

In all two weeks were cut back for a condensed 2018 league schedule, with weather postponements causing a panic to leave April, almost vacant. Tipperary play Kilkenny in Sunday’s hurling league final.

Of the 31 counties in the All-Ireland football championship, and the 13 Division One hurling counties (12 plus Carlow who were promoted last month) only 12 are playing two rounds of championship in April. Seven are playing one round.

Almost all of the counties – all but one – playing two rounds were already playing championship fixtures in April prior to this year. The exception, Roscommon, instead played their two early rounds in May last year.

No Ulster county will host club championship fixtures in April, they will instead run additional rounds of their league competitions with their county players made available, as is the case elsewhere.

One third of the 12 dual counties recorded will not run fixtures in April, while others such as Dublin, Limerick, Waterford and Offaly will host two games in football and two in hurling.

Tipperary will host one round of hurling fixtures and one of football, but they will also play a round of divisional hurling championship which runs into their county competition. There are no Kerry county championship fixtures this month, but, there are five weekends of the 'club' football championship, with the final being played on the first weekend of May.

Some counties have opted against championship fixtures in April due to the proximity to their county team’s provincial openers.

There will be no fixtures in Galway prior to their Connacht quarter-final against Mayo (May 13th), although in Mayo one round will be played.

Other county boards have – after much discussion – decided against splitting their championship in two. Many want to have their leagues finished before the start of the championship to maintain competitiveness.

While others would rather take the chance of a late-summer rush and reduced championship football during the more favourable weather, than have a long wait between rounds. In Donegal the championship will begin in September, even if their county team make an early exit. Most counties however will have an indefinite start, or resumption date.

Feargal McGill, the GAA’s director of games administration told The Irish Times that the aim of the club-only month was to increase club activity and not necessarily club championship activity.

As for it being a solution to the club fixtures chaos, McGill says it was “part of the solution to it”, along with tightening up August. By which stage he says many counties will already be out of the All-Ireland and free to focus on the completion of their club competitions.

“There is a learning process to this, and all we could do initially was create the space,” explains McGill. “I don’t expect counties to maximise the use of April straight away, but they’ll see and learn and that’s what a lot of fixture planning is.

“Some run rounds from April in order to have finished up in time for the start of the provincial championships. I’ve found though that the counties who do play in April tend to be dual counties or counties with six-team round-robin groups in their championships.

“Our aim was never that this would be a club championship month, but one with heavy club activity involving county players. It’s up to each county after that to use these weeks. For some counties league games are of a higher value but not in others. But I’m certain that when we evaluate this there will be an increase in club activity in April. Club activity with county players.”

*All data obtained via county board officials.