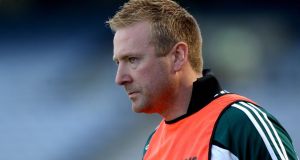 Kildare Manager Brian Lawlor: “We won our five games and we still have to play a final to see if we get promoted.” Photograph: Ryan Byrne/Inpho

hit out at the “nonsense” arrangement of deciding promotion with playoffs at the lower levels of the Allianz Hurling League.

Christy Ring Cup holders Kildare face Meath in the Division 2B final on Saturday with the winners going up to Division 2A for 2016.

But Kildare finished their Division 2B campaign with a 100 per cent record – four points clear of Meath – and Murphy is adamant this should have been enough to secure promotion.

That’s exactly what happens in Division 1B, where Waterford gained automatic promotion as table-toppers; however, promotion finals are in place for the lower divisions.

were similarly frustrated last year when they won the Christy Ring Cup but were denied automatic qualification to the senior All-Ireland championship – and they lost a promotion/relegation playoff to Westmeath.

“Basically, if you top the league you should gain promotion without any need for this playoff nonsense,” said Lawlor. “We won our five games and we still have to play a final to see if we get promoted.

“If you win your games in the football and finish in the top two, you play a final but the top two teams are also guaranteed promotion.

“If things were done in a fair way, Kerry would have been in Division 1B this year and Kildare, as Christy Ring Cup winners, would be playing in the round-robin for the Liam MacCarthy Cup.

“We have to beat Meath next Saturday to get into Division 2A for next year and we have to win the Christy Ring Cup again to get up a level in the Championship.”

Referencing the different promotion and relegation rules that operate in different divisions, Lawlor said it has left him dumbfounded.

“Every league division has different rules as regards promotion and relegation, it’s crazy.

“It depends on what division you are in, you could have a playoff to avoid relegation or a playoff to get promotion.”

Kildare look set to be without Tipperary native David Young, a substitute in the 2010 All-Ireland final win over Kilkenny, as well as Gerry Keegan due to injury.