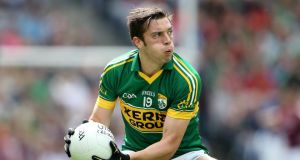 David Moran will start at midfield for Kerry in their All-Ireland SFC semi-final against Mayo at Croke Park on Sunday after impressing when he came on as a substitute in the quarter-final victory over Galway. Photograph: Cathal Noonan/Inpho

Only three changes to the Kerry team but they could provide the most revealing glimpse into the Kingdom’s footballing future. Éamonn Fitzmaurice’s side will take the field at Croke Park on Sunday, to face an unchanged Mayo XV in the All-Ireland semi-final, without Declan O’Sullivan and Bryan Sheehan.

Both men, with four All Stars and eight Celtic Crosses between them, are injured.

How seriously injured remains to be seen. Fitzmaurice has named both men on his bench. Sheehan could yet recover from the knee injury that saw him last just two minutes of the All-Ireland quarter-final victory over Galway on August 3rd.

O’Sullivan will almost certainly be used if the Munster champions are struggling.

But it’s this pair’s inability to reach sufficient fitness levels that will have Kerry’s travelling support deeply concerned about facing a county that has suffered too many painful defeats to them in modern times.

Sheehan’s benching means David Moran will be involved in the crucial midfield tussle from the throw in, while Stephen O’Brien has regained fitness to wear number 13.

The other change in the Kerry ranks is tactical as Killian Young, a defensive stalwart in the recent seasons, makes way for Peter Crowley.

This represents Fitzmaurice’s clear intent to stare down Mayo’s attacking waves and stop a repeat of the goal Galway midfielder Tom Flynn plundered the last day.

Crowley, from Laune Rangers, along with fullback Aidan O’Mahony behind him, brings a physicality that it is hoped can stymie the force of nature Aidan O’Shea is becoming.

Sheehan’s enforced absence against Galway was covered by two factors; the 1-18 of Kerry’s 1-20 total coming from play and Moran’s excellent performance.

With Sheehan unfit, their main free-taker remains unclear. They do at least have options. Paul Geaney from Dingle and Johnny Buckley both split the posts with frees earlier this month, while James O’Donoghue is having trouble missing from any angle of late.

O’Donoghue’s stunning 1-5 against Galway was arguably more impressive than his 0-10 against Cork in the provincial final. He is currently on the road to being named footballer of the year. But Sheehan is Kerry’s established marksman from placed balls.

And O’Sullivan is the man so much of Kerry’s creativity has stemmed from, especially since Colm Cooper’s injury.

At least the Kerry bench offers a wealth of options. Darran O’Sullivan is the ultimate impact sub; Barry John Keane helped himself to 0-3 when replacing Buckley in the quarter-final, while Kieran O’Leary is another decent attacker. Defence can also be reshuffled with Mark Griffin and Young to come in.

There is also former footballer of the year Kieran Donaghy to be considered.

In last night’s official release, neither O’Sullivan nor Sheehan were described as injured. Nor should it come as a surprise if one, or the other, miraculously starts.

Mayo manager James Horan names the same side that beat Cork in the quarter-finals.

The major debate among Horan’s management has been the midfield duo. Donal Vaughan and Séamus O’Shea showed up for the throw in against Cork in their quarter-final with Aidan O’Shea at centre forward. The younger O’Shea brother regularly drops into the middle for kick outs and to conserve energy before his trademark surges.

If Anthony Maher and Moran get the upper hand then Barry Moran can be introduced. Horan can also look to Jason Gibbons or Tom Cunniffe.

Mayo have a great chance to avenge the hurt of the 2011 All-Ireland semi-final, along with the 2006 and 2004 September cake walks. They lost those three matches by a combined total of 30 points.

When the counties met in this year’s league, in Castlebar in March, Mayo ran out 2-15 to 1-13 victors. Not that it matters. Fitzmaurice was still trying to figure out his best team. There are four changes in personnel since that day.