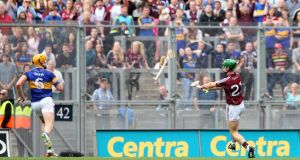 What an exciting time to be a hurler or a hurling supporter in Galway or Kilkenny, even more exciting if you’re a Galway senior hurler heading to Dublin to play in you first All-Ireland final, particularly teenager Conor Whelan who only played his first championship game in late July.

The build-up began for the forward thinking-supporter on the Sunday evening that Shane Moloney’s last-gasp winning point guaranteed victory. Preparation for the journey to Croke Park in September began immediately.

First stop was the phone, PC or laptop to check hotel availability on the first weekend in September. No doubt flights were being sourced by the Galway diaspora from Chicago to Shanghai to downtown Melbourne even before the players had left the showers that evening

Now, with the final only 10 days away, the elusive match ticket is like a new currency. Rumour and counter-rumour permeate. There might be the hope of a few tickets from New York or England or the possibility of a swap with a Kerry football follower. A friend of someone else’s brother lives near Joe Connolly and he’ll surely have a few. Someone else is working with a fella who knows the county secretary in Longford and he might be worth a call.

A press evening has become part of the protocol in the build-up to all the championship games. This occasion of media access to at least some of the team is important as it guarantees all those who attend a few valuable quotes and it also guarantees the teams their very important last few training sessions don’t become media circuses.

Some of the Galway players have much that is new to cope with these weeks. There’s the awful hassle that goes with the match tickets and “friends” appearing out of the woodwork. There’s the perception that the players get a lot of tickets and that they get most of them without any money changing hands. Another extra irritation for the players is the collecting of money for the few tickets they get and for the post-match banquet tickets.

Training can become a bit of a circus some nights with big crowds, unsupervised kids running wild, autograph hunters and well-wishers.

With the days getting shorter training probably is half an hour earlier. There can be a chill in the air some nights so there’s a danger of players picking up colds if they’re hanging around signing autographs. This can add an extra half hour to their time at the training grounds and that after coming straight from work for most of them.

Then there’s the matter of the formal wear for the weekend. There are decisions to be made on style, colour, ties, and shirts. There are sizes to be taken and fittings and alterations. This again is an extra that the new players haven’t had to cope with before.

There are the personal appearances that some or many players will be requested to do. New “unofficial” sponsors appear out of nowhere offering goods like leisure wear, toiletries, bags etc – to show their appreciation to the team of course! All they ask is a photo or a selfie taken with some players or maybe a spare ticket!

It’s all new and wonderful to many of the Galway lads . There isn’t a hurler in the country with any ambition who wouldn’t love to be in the position these Galway and Kilkenny hurlers are in. But for Galway there’s a danger the game might take second place in the build-up. When there is so much going on off the field it can be very difficult for the players to stay focused on the main event.

I hope I’m not painting too drab a picture of what life is like for the teams and managements leading up to hurling’s most important fixture but I think it’s important for the well wishing public to understand what life is like behind the scenes in these exciting weeks.

All of the Kilkenny players have been through all this many times before and will have their own way of dealing with it. But they don’t need reminding of the frenzy that grew around Henry Shefflin’s cruciate before the 2010 final. With much talk of five in a row in the air, thousands came to training nightly watching a miracle seemingly develop before their very eyes as Henry appeared to be defying nature, science and medicine. But of course the bottom line was that nature won the recovery battle and Tipperary won the final.

So the countdown is well on and not a mention yet of tactics, James Owens, defensive systems, sweepers, controlled aggression, cones, hooks and blocks count, playing deep, Hogan Stand, Up For the Match, The Rose of Mooncoin, The West’s Awake , The Sunday Game , Twitter, premium seats, car passes, Galway full-back line, Jackie Tyrell, hurlers of the year, Joe Canning’s radar, influencing referees, “see you in September” or ABKs .